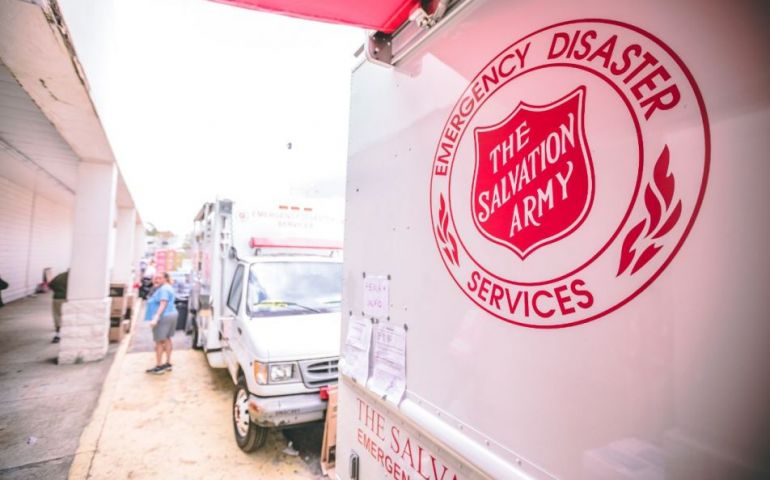 Lumberton, NC (September 24, 2018)  -- The waterways have crested, water is starting to recede, and many in Robeson County are getting their first look at what is left of the symbols of their lives.

“This is forty years of memories, and I can hardly recognize my own living room,” said Shirley B. (she preferred not to give her last name).  “We sat on their porch, sipped a cold bottle of water, talked, and prayed,” said Ken Brown.  Brown is a trained Salvation Army Emergency Disaster Services responder from Greensboro, North Carolina.   He and a fellow staff member drove a canteen (mobile feeding kitchen) to Lumberton, NC packed with supplies.

Perhaps the most important thing they brought was an unquenchable spirit to serve.  But a close second is what seems to be a bottomless well of energy.   Brown is coming up on the end of his two-week deployment but still shares a quick smile as he serves hot meals and cold drinks for the canteen window.  Soon, Brown will return home, being replaced by another trained team coming in from Frankfort, Kentucky.

Shirley went on to share, “It’s just overwhelming to think about.   My head starts to spin and my heart speeds up.”  In times of disaster, The Salvation Army is best known for providing food and water.  But, “what makes The Salvation Army special is the ability to serve holistically; we feed body, mind, and soul,” said Major Tim Grider, the Fayetteville Corps Officer.  Who, along with his wife, Cheryl, is responsible for The Salvation Army services in Fayetteville and surrounding counties.

Leveraging the nationwide network of resources, The Salvation Army is sending personnel to replace some personnel already working the Robeson County and additional resources – trained workers and response vehicles -- to increase the response effort.

Grider said, “The Salvation Army has been here for years, working every day to improve and empower the lives of those in need.  Today, The Salvation Army is serving our neighbors as they rebuild their lives in the wake of Hurricane Florence flooding.  The Salvation Army will still be here tomorrow, meeting human need where we find it; making the most of the resources the community has entrusted to us.”