The Building is Not the Army! We are the Army! 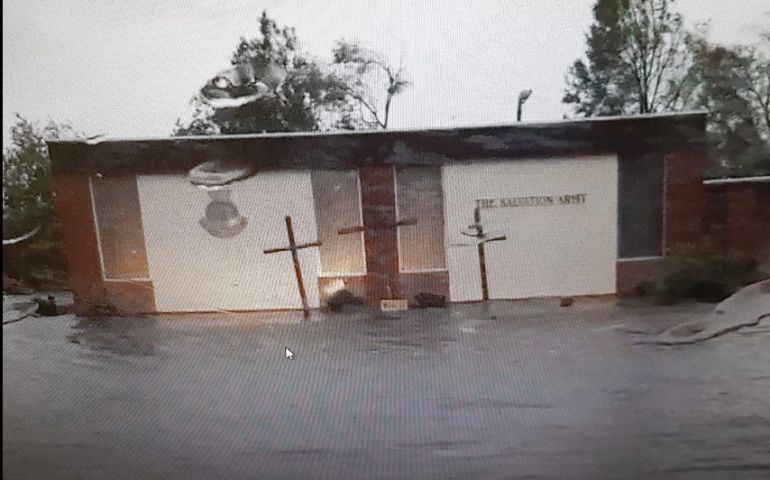 New Bern, NC (September 23, 2018)--The Salvation Army in New Bern, North Carolina held worship this morning. The band played "Great is Thy Faithfulness," hymns were sung, a message was delivered, scripture was read. The service was much like any other Salvation Army service in the more than 14,000 Salvation Army worship locations all over the world.

This worship service, however, was not like any other. It was held in a donated space hastily set up for the service. White plastic chairs replaced upholstered pews. The backdrop to the pulpit was a curtain of white pipe and drape. Instead of worshipping in the church that stood for generations, 45 people came to an unfamiliar building to praise God.

The worshippers were full of joy and thanksgiving despite the destruction Hurricane Florence brought to the second oldest town in North Carolina.

During and immediately after Hurricane Florence, New Bern saw more than ten feet of storm surge and flooding when the Neuse and Trent rivers rose ten feet in hours. Almost a foot of rain fell in the area, creating even more flooding. More than 450 of the 30,000 residents of New Bern had to be rescued. The Salvation Army corps building in New Bern still stood but took on two-plus feet of water. Much of the building was heavily damaged in the storm, but the three crosses in front of the church stood firm.

“That building was just brick and mortar. It was just a building. The building is NOT the Army. We are the Army. You are the Army. And we, as the Army, have work to do!,” said Captain Curtis Kratz, corps officer for The Salvation Army of New Bern, in his sermon.

Since the storm hit New Bern, The Salvation Army has been at work. Feeding people. Giving hope through outdoor meetings. Being a helping hand in a storm-ravaged community. Since before the storm hit, more than 11,000 meals have been served to first responders and people impacted by the storm. More than 360 people have received prayers and words of encouragement from Salvation Army pastors.

In the coming weeks, the shock from the storm will wear off. Families will have to figure out a new plan. And The Salvation Army will be there, working alongside the community to rebuild.