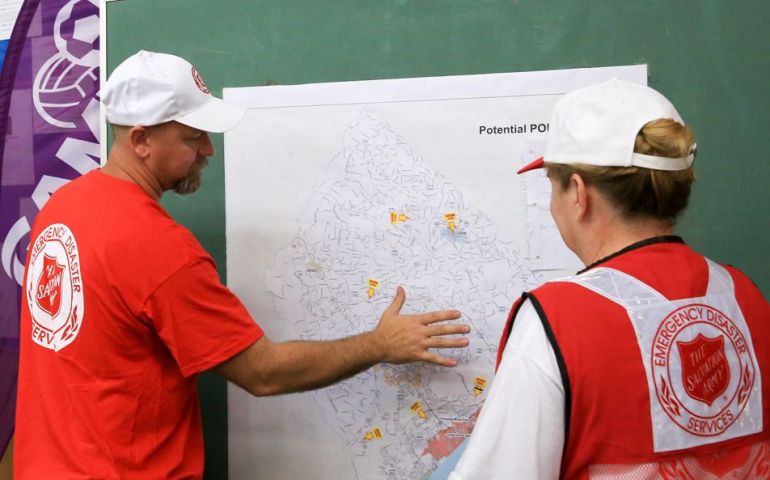 CONWAY, SC (September 22, 2018) - “The disaster after the disaster is coming.” said a resident of the Rosewood community in Conway, S.C. looking at the slowly rising waters in his neighborhood.

The torrent of water Hurricane Florence released over North Carolina is making its way slowly downstream to the low country of South Carolina, spreading anxiety and a sense of impending ruin ahead of its anticipated historic levels.

“They got hit, but the big hit comes days later and it will be the biggest they’ve ever had,” said President Trump said after visiting Conway, S.C. earlier in the week.

The Waccamaw River in Conway is expected to rise higher than the previous record set by Hurricane Matthew two years ago. National Guard troops in boats and big trucks continue to help people get out of flooded homes and up to higher ground.

New roads continue to be closed due to rising waters. Roads accessible one day may not available the next, hindering relief efforts. Traffic is often in gridlock, yet people patiently work together to persevere through the challenge, knowing that they are collectively in this together. One Salvation Army canteen (mobile feeding unit) stuck in traffic at 1:30 a.m. returning to their base, was able to turn off their truck and hand out water and snacks to other appreciative motorists close by who were also stuck in the gridlock traffic.

The Salvation Army continues to coordinate relief efforts with other official and non-profit agencies through the Waccamaw Volunteer Organizations Active in Disaster (VOAD). The local Conway Salvation Army officer, Major Angela Repass, also serves as the Chair of VOAD in Horry County. She is also acting as The Salvation Army liaison to VOAD in the Horry County Emergency Operation Center.

The Salvation Army Incident Command Center, coordinating relief efforts for the Conway, Georgetown and Myrtle Beach area, is currently located inside the Boys and Girls Club of Conway. They have a fleet of 7 mobile feeding units (canteens) and approximately a dozen other other official vehicles assisting in relief efforts. As waters rise, access is anticipated to be cut off to the current Incident Command Center, so The Salvation Army is changing strategy.

“If we stay in the Conway, we will be stranded by the rising waters and not able to help any of the surrounding areas,” says Major Andrew Gilliam, Operations Chief for The Salvation Army Incident Command Center in Conway. “We will be splitting our operations into three separate staging areas north and south of Conway, and another one in the coastal Myrtle Beach area.”

“The plan is to implement this new strategy starting this Monday,” says The Salvation Army Incident Commander, Jerry Williams. “As waters rise, we will continue to assess and adapt to the changing situation here in the Conway to meet the needs of those impacted by these rising waters.”