Salvation Army Played a Valuable Role in our Time of Need 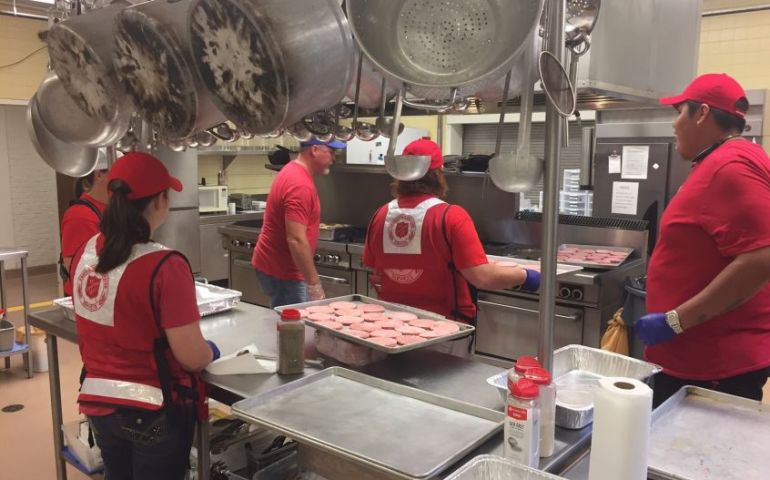 MARION, SC (September 22, 2018) – Heading into Marion, SC, three of the four main routes into town are closed due to flooded out roads.  With the rivers and creeks in the area reaching flood stages not seen since Hurricane Floyd in 1999, a local shelter has opened up to house people at the Tolison Recreation Center just outside of downtown Marion.  “These people don’t have a lot to start with,” said one local resident, “and then the water comes and takes the rest.”

In Marion, The Salvation Army provided mobile feeding units to serve warm meals and snacks to the Marion County Emergency Operations Center and to the residents and staff of the shelter set up at the Tolison Recreation Center.

Said Chief Tony Flowers of the Marion Police Department, "The Salvation Army has played a valuable role during our time of need.  They have provided hot meals to first responders who are working non-stop and, prior to The Salvation Army stepping in, were surviving off of dry snacks while they worked.  The Salvation Army has also provided hot meals to those that were evacuated and now staying in shelters.  These people may possibly lose everything and providing a hot meal to them lets them know that someone cares and is thinking of them in this time of need.  By providing smiles and showing compassion while serving first responders and evacuees, it lets us know that someone cares and that we are appreciated."

Melissa Cline, a Salvation Army Emergency Disaster Services volunteer from Salisbury, NC, is one of those volunteers showing these communities what it truly means to do the most good.  “I am ready to get out and about in the canteen and feed some hot meals to the communities that lost so much, they need some hope and compassion.”