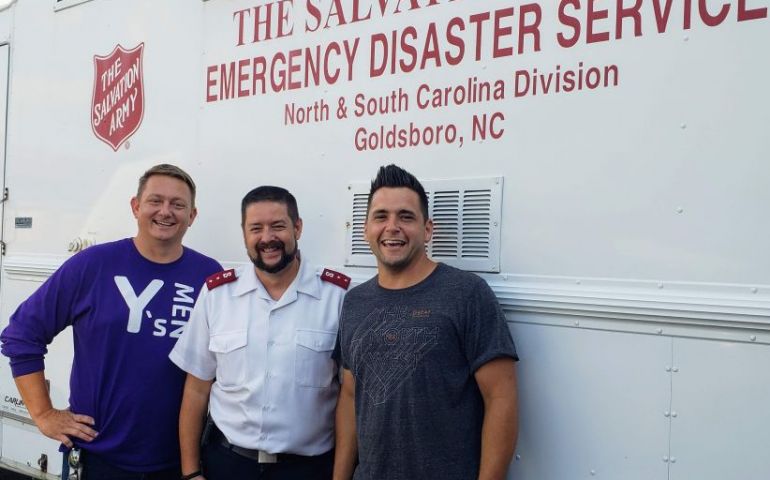 Goldsboro, NC (September 21, 2018)--Friendships and partnerships in the community are very important to Captains Philip and Sherri Stokes.   They understand how important they are on an everyday basis to serve those in need.   And, when disaster strikes, they become even more valuable.   One of those partnerships is with Bethel Church.

Daniel Weeks and Phillip Sexton, pastors at Bethel Church called immediately after the storm to ask if there was anything they could do to help in response to the storm.   It turned out, several whole pigs had recently been donated to The Salvation Army.   The offer was made to pick up some of the pigs to cook.   Barbeque pork dinners made many storm survivors as well as emergency responders very happy.

Additionally, the church congregation wanted to help those who lost all their food during power outages Florence caused. Instead of holding their regular Wednesday night meeting, they decided to give back to the community.  With the help of 120 people from the church congregation and The Salvation Army, they were able to deliver 180 meals to those in need at the Carolina Motel, Alpha Arms Apartments and West Haven Apartments.

Captain Philip Stokes was so encouraged by this action, he has challenged other churches to be the church in the community by taking an evening of bible study and going out to serve those in need with a warm meal and a caring hand.

As the effects of Florence continue to impact Wayne County, The Salvation Army continues to meet the need with the help of generous contributions.