People Coming Together to Support Down East Communities in NC 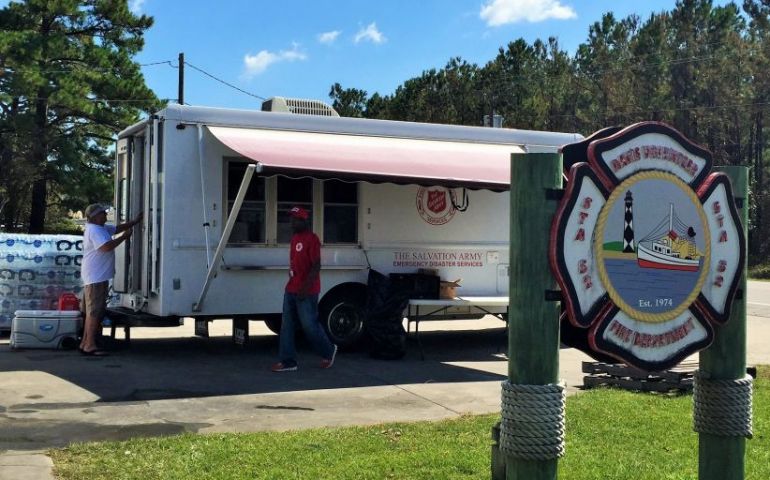 MOREHEAD CITY, NC (September 20, 2018) – As you drive for miles and miles on Highway 70 East toward the coast, there are a few common sights: massive trees plucked out of the ground; power poles leaning over as if the slightest touch will send them down the rest of the way; and power lines strung like streamers across country roads. You’ll also find community after community of people working together to help each other in this time of need after Hurricane Florence left her mark.

This is “Down East.” In these communities – places like Davis, Harkers Island, Atlantic and Cedar Island – there aren’t many services. Most of the communities have a church, a volunteer fire department, maybe a school and a few homes. Residents lack water, gas or supplies and are in essence, cut off from the rest of the county. There’s not much cellular coverage out here, so even making a phone call is a tall order. Needless to say, access to help has been sparse.

Every day, The Salvation Army has been loading up food in its mobile feeding kitchen, and making the trek (about 35 miles) from Newport to Davis to offer lunch. In addition, the crew has been making stops in other communities like South River, Atlantic and Cedar Island. On several days, they travel back to Newport to reload and return for dinner.

These areas could be without power for a month or longer, so a hot meal is a welcomed sight. In Davis, the volunteer fire station is the hub of activity.

“Each day, when we pull up, there’s usually a line waiting for us,” said Sarah Smith-Ruiz, a member of The Salvation Army team. “The people here are so appreciative. We have the opportunity to provide food, prayer, a kind word, and they are so thankful.”

The needs have been so great in the other parts of the county, help hasn’t been able to come Down East. The Salvation Army has met some immediate needs though, and people like Marty Hiatt are rallying the troops to provide other help.

Hiatt (known locally by many by the nickname “WAHOONBOX”) lives in Morehead City, which faced its own devastation from Hurricane Florence. In fact, a tree went through his Hiatt’s condo. But, he recognizes it’s on another level Down East.

“I had to help,” Hiatt said. “It easily could have been me.”

At one point in his life, it was him. As a younger man, Hiatt had an encounter with The Salvation Army. He was going to lose his car if he couldn’t come up with $95.68. He was struggling to make ends meet. The Salvation Army met his need. The officer told him all those years ago, “Just pay it forward when you can.”

Now, Hiatt is a well-respected and successful sport fisherman based in Morehead City. He’s in a position to pay it forward, which has now been doing for years. He went down to Louisiana after Hurricane Katrina, but this time it was close to home. He had to do something for his neighbors who were hurting.

Ask and you shall receive.

The donations rolled in, literally by the truckload, to the Davis Volunteer Fire Station 52. Food, water, MREs, wipes, paper towels and cleaning supplies – all for the residents of Davis and these underserved Down East communities.

“What I’ve witnessed the last 5 days is unbelievable American heroics! Everyone here is in wet clothes either from sweat or rain,” Hiatt posted. He’s a “get-it-done” type of guy, so you can easily see how moved he is by the support he’s received.

This day, Hiatt isn’t a fisherman. Instead, he is directing traffic, showing people where to offload and place pallets of cleaning supplies and paper products. In between, he helps people load items in their cars and greets others with a handshake and a smile.

The people Down East have endured hurricanes before. Yes, Florence took its toll on communities like Davis. But, The Salvation Army and people like Marty Hiatt are helping them move forward today and will be there to help them again tomorrow.