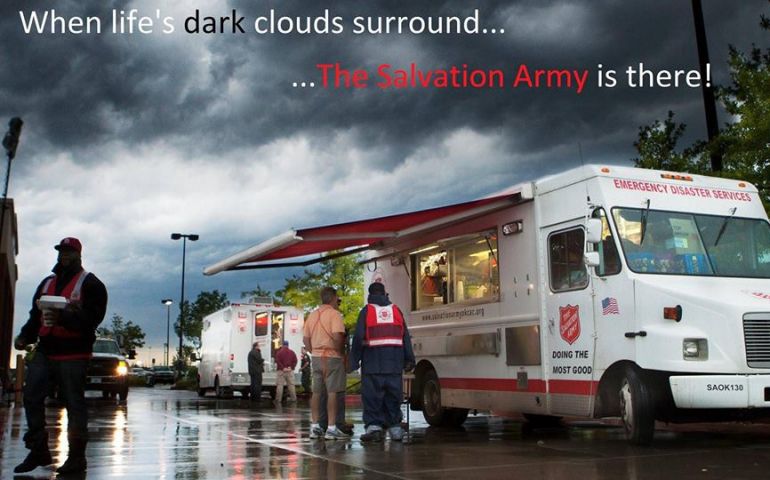 Dallas, TX (September 11, 2018)  - A 10-person Incident Management Team from The Salvation Army in Texas deployed on Tuesday joining Emergency Disaster Services (EDS) teams across the south actively preparing for the possibility of a significant response to Hurricane Florence as the storm intensifies and heads towards the U.S. east coast.

The storm is expected to make landfall on Thursday with the Carolinas directly in the projected track of the storm. The Salvation Army North and South Carolina (NSC) Division currently has 13 mobile kitchen units and crews prepared and on standby with two units already deployed. An additional 20 mobile feeding units from neighboring states will be headed to a staging area in Charlotte, NC, along with a 53’ refrigerated feeding support trailer and a kitchen with the capacity to produce 25,000 meals per day.

Preparations are also being made further up the coast in the Washington D.C. and Virginia areas with 10 mobile feeding units and crews on standby and seven units deploying to Roanoke, VA, in advance of projected flooding there.

The 10-person Incident Management Team from Texas, who bring recent and valuable experience of large-scale disaster response following Hurricane Harvey in 2017, are led by Alvin Migues, Salvation Army Emergency Disaster Services Director for the Texas Division. Team members are specially trained in key areas of emergency disaster response and will potentially oversee and coordinate relief efforts in a designated area. “Our team will be initially staged in Charlotte and once the storm makes landfall we will move into areas of key need,” said Migues. “We anticipate that we‘ll be managing a large-scale feeding operation, utilizing more than 25 Salvation Army mobile kitchen units and providing assistance over a large area.”

One of the strengths of The Salvation Army EDS structure is that it is rapidly scalable in times of disaster. “Mobile kitchens are assigned to local Salvation Army units around the country and can be mobilized very quickly to respond to an event,” said Migues. “Additionally, The Salvation Army has its own disaster training curriculum and we have fully trained teams ready to deploy literally at a moment’s notice.”

“After the incredible, practical support we received in Texas following Hurricane Harvey last year, the Texas team is privileged and more ready than ever to come to the aid of those affected by Florence,” said Migues. “The Salvation Army will be there to feed, support and pray with those who find themselves in a time of crisis after the storm, all in the name of Jesus.”

For more information on The Salvation Army’s Emergency Disaster Services and the ongoing situation regarding Hurricane Florence response, visit: www.disaster.salvationarmyusa.org