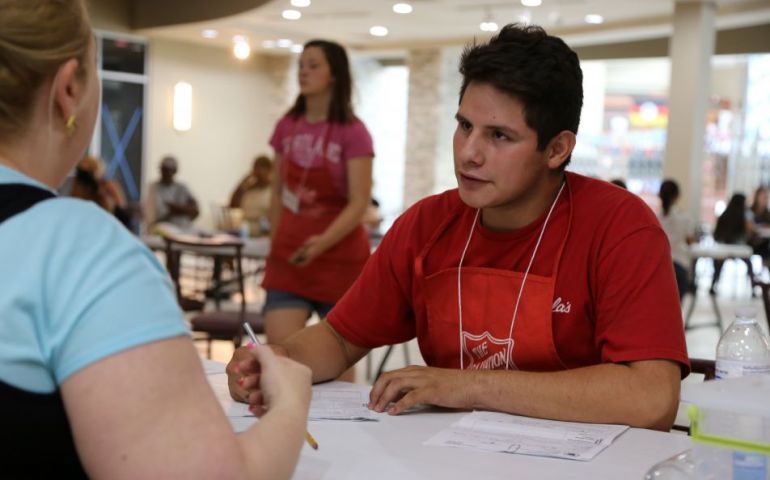 Dallas, TX (8/30/18) – One year after Hurricane Harvey devastated much of the Texas coastline, The Salvation Army continues to meet with individuals and families struggling to survive and working to put their lives back together.

Throughout affected areas Salvation Army case managers meet with those in need, setting achievable goals and plotting a course of recovery towards self-sufficiency. Storm survivors can receive financial assistance and referrals to partner agencies and other non-governmental organizations. Eight warehouses serving as points of distribution across the affected region have been opened and these facilities are actively receiving, sorting and distributing a wide range of donated items.

Special efforts have been made by The Salvation Army to reach into underserved areas affected by Harvey. One such community is the city of Cleveland, located in Liberty County, north of Houston. Pastor Christine Shippey, founder of Covenant with Christ International, connected with Misti Townsend, a Regional Recovery Program Manager for The Salvation Army, and was desperately seeking a way to help survivors after local funding ran out. Reverend Shippey had recently secured a warehouse and delivery vans at the same time as The Salvation Army was seeking a location and a network to store and distribute goods to rural counties. “A wonderful partnership has developed between The Salvation Army and Covenant with Christ International under the guidance of Reverend Shippey,” said Townsend. “We are now able to deliver much needed supplies that can be distributed to those working so hard to put their lives back together in small, rural communities in this area.”

The Salvation Army is proud of its excellent reputation and history of helping those in need. Our mobile kitchens were the first and only source of help and meals that many Harvey survivors had seen, even several days after the storm. Disaster staff and volunteers walked through devastated neighborhoods in Houston and other cities hand-delivering cleanup kits and drinks to residents working to clean out their flooded homes. Salvation Army emotional and spiritual care teams visited communities with the specific goal to speak with, listen to, and pray with storm survivors.

Motivated by the love of God and with a mission to meet human need, The Salvation army provides service in every zip code in Texas and is committed to stand by its brand promise “Doing the Most Good” as individuals and families work and hope to get life back to normal, one year after Hurricane Harvey.