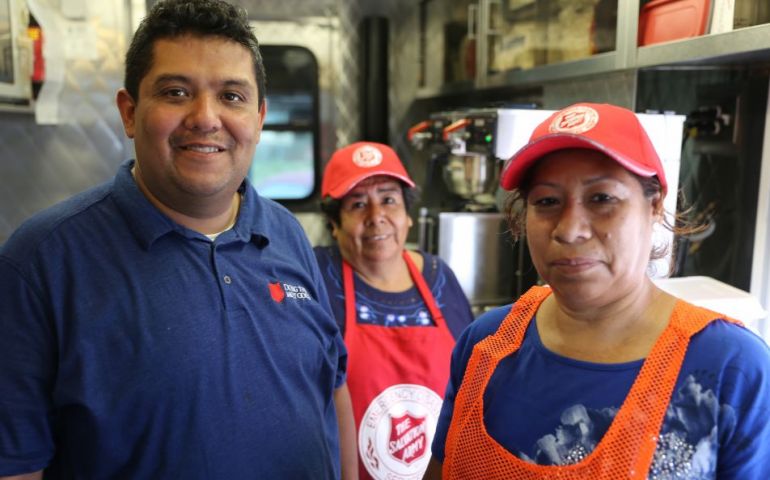 Dallas, TX (8/22/18) – Trained Emergency Disaster volunteers and corporate partners played a key part in the massive response efforts of The Salvation Army after Hurricane Harvey. At the peak of service, hundreds of Salvation Army staff and volunteers tirelessly prepared and served meals each day from more than 100 mobile kitchens active in affected communities along the Texas coastline. For many survivors and response teams, the hot food and snacks provided by The Salvation Army’s committed volunteers were the only meals they could count on each day for several weeks.

“We left Austin on Saturday, August 25, right after the storm made landfall and spent the first few days serving meals in Victoria and Seadrift, before moving to La Grange,” said Bruce Peterson, a longtime EDS volunteer from Williamson County. “Victoria was devastated. There was no power at all. All six of our team were able to stay with a friend of mine just outside the city. Incredibly, her house was the only one in the entire neighborhood that had power. We were able to cook 150 breakfast tacos in the morning and delivered breakfast to the entire street,” said Bruce.

Bruce and the EDS volunteer teams from Williamson County were deployed for four weeks. “We typically are out there for 14 days at a time and then our second team will rotate in,” said Bruce. “I got home after about a month and then got a call asking me to help set up a Salvation Army warehouse in Houston. I ended up being gone another 17 days.”

Bruce’s dedication is typical of The Salvation Army trained disaster volunteers who are crucial to the success of our emergency relief efforts. The Salvation Army Emergency Disaster Services (EDS) operates a robust and comprehensive volunteer training program. Trained and certified Salvation Army volunteers are the first to be deployed during times of disaster. Available courses include classes in incident management, mobile kitchen operations, food service, emotional and spiritual care and basic first aid and CPR training, among others.

Another volunteer team, all members of The Salvation Army Women’s Service League in Granbury, served in Victoria for a month. “I was part of the second team deployed. By the time I arrived in Victoria, the power was back on and people were beginning to start recovery efforts,” said Linda Dowell, EDS volunteer. “Our team was a praying team. We would pray in the truck that God would guide us, pray as we prepared the food, and were always ready to pray with those who came to us for help. We would deliver food, speak with the survivors for a few moments and then our Emotional and Spiritual Care team would meet with the families,” said Linda. “It was a beautiful thing.”

“Our emergency disaster services volunteers are among some of the most hardworking and committed people I have ever served with,” said Alvin Migues, EDS Director for The Salvation Army in Texas. “This was never more evident than during Hurricane Harvey response. Our registered volunteers know that there is a good chance they’ll be deployed to support relief efforts and, true to form, our people were prepared, available and ready to answer the call when we needed them. The Salvation Army simply couldn't have responded on the scale that we did, and help so many people, without our volunteers.”

Corporate partnerships also are important to the success of The Salvation Army disaster response efforts. With established long-term relationships with many community-minded businesses, The Salvation Army can count on these partners to step up and support our work in times of disaster.

“The Salvation Army is grateful for our corporate partners who come alongside us in times of need. Whether it be through financial support, gifts in-kind, or perhaps donation of infrastructure and volunteers, they make it possible for us to respond effectively and efficiently on a large scale,” said Migues. “Even today, ongoing partnerships with JCPenney, Ashley Furniture, Good360, Rooms To Go, Mattress Firm and many others are making it possible for The Salvation Army to deliver very practical help to individuals and families still working to put their homes and lives back together.”

To support the ongoing work of The Salvation Army in Hurricane Harvey recovery or for more information go to www.salvationarmytexas.org/harvey/