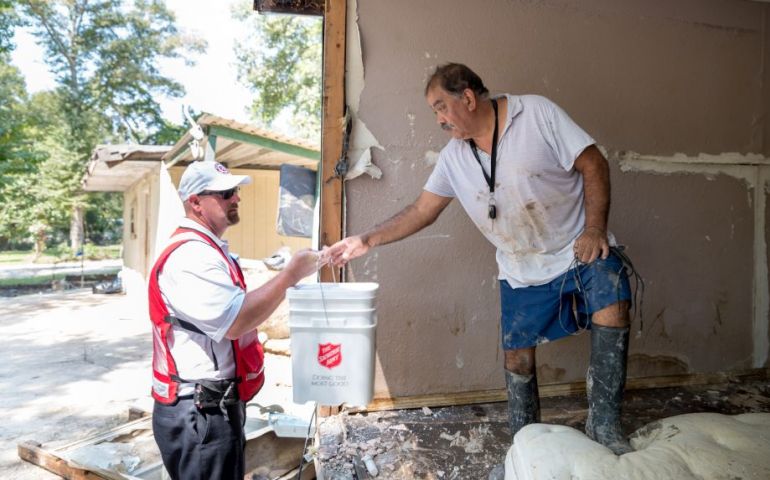 One Year After Hurricane Harvey, The Salvation Army is Still Working in Affected Areas

Dallas, TX (8/13/18) – “The water was about six inches from my roof after they opened the floodgates at Livingston Lake,” said Joe. “My house flooded once before in 2016 and I had about two feet of water in there, but this was like nothing I’d ever seen before.”

Joe’s story is like countless others who experienced record flooding caused by days of torrential rain from a stalling Hurricane Harvey. Residents watched the water levels steadily rise before being forced to evacuate. “I eventually had to leave and ended up getting a hotel room through FEMA. I stayed there a couple of months before I could get back to my house,” said Joe. “I had to basically strip my place and rebuild from scratch.”

“As soon as the flooding had gone, The Salvation Army was out there with food and cleaning supplies. I remember they did the same back in 2016, serving three meals a day. Whatever you needed they would figure it out, even shovels and stuff,” said Joe. While working to rebuild his home, Joe heard that residents could receive financial assistance from The Salvation Army. So, he reached out to Misti Townsend, a Regional Recovery Manager for The Salvation Army. “I had no idea that months later they would still be around to help.”

After meeting with Misti, Joe received financial assistance in the form of a store voucher. “Working with Misti was great and I was so impressed with The Salvation Army. She understood my situation and the process was smooth and easy,” said Joe. “I was able to get $1,000 worth of building materials and appliances. I had lost just about everything and so this help was great.”

The Salvation Army continues to work with individuals and families who were affected by Hurricane Harvey. Reaching into underserved areas of Texas impacted by the storm, case workers have been able to identify and help thousands of people just like Joe. Working closely with community advocates and agencies, The Salvation Army continues to help affected families gradually get back on their feet.

“It was amazing to see so many groups come together after Harvey. We had people coming into our neighborhood in pickup trucks and flat beds handing out food and supplies, as well as groups like The Salvation Army,” said Joe. “I didn’t know very much about The Salvation Army, but they have really come through for me – not once but twice! I can’t thank them enough. They were here right after the water went down and are still here for people like me, all these months later.”

To support the ongoing work of The Salvation Army in Hurricane Harvey recovery or for more information go to www.salvationarmytexas.org/harvey/