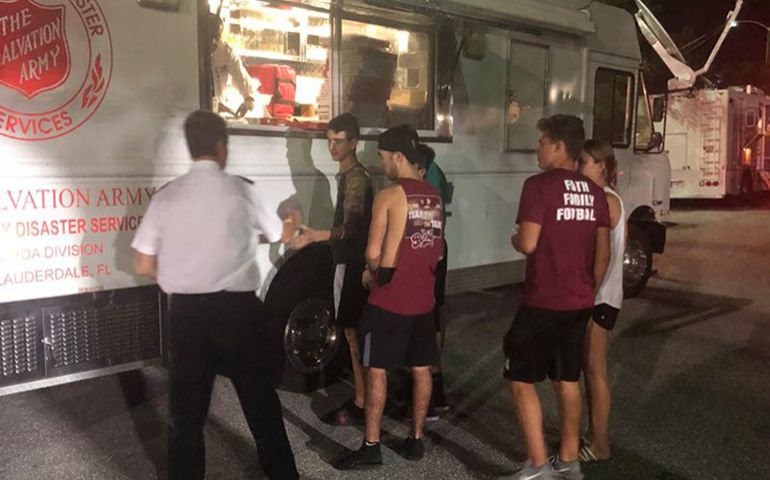 Broward County, FL – As hundreds of students, parents, and neighbors gathered to honor the victims of the Parkland school shooting, The Salvation Army was on site providing emotional and spiritual care as well as meals, drinks, and snacks.

The Salvation Army mobile feeding units from Fort Lauderdale and West Palm Beach were stationed at the Parkland Recreation and Enrichment Center, adjacent to the amphitheater where the prayer vigil was held.  The two feeding units, equipped with Salvation Army officers, staff, and volunteers, distributed over 300 meals, drinks, and snacks to vigil attendees. Local and state officials, including Florida Governor Rick Scott, stopped by the feeding units to greet and thank The Salvation Army for their support and discuss coordination of resources as the community finds ways to heal from this tragedy.

“Emotional and spiritual care is an important part of our disaster response,” said Major Keath Biggers, Fort Lauderdale Area Commander.  “To be able to provide some level of comfort to those mourning after such a tragic loss is a duty we do not take lightly.” The Salvation Army prayed with and comforted many of those in attendance.

The Salvation Army continues to work with local officials and partner community based organizations to determine long term services to the families affected by this tragedy.