Salvation Army Transitions from Response to Recovery for Harvey & Irma 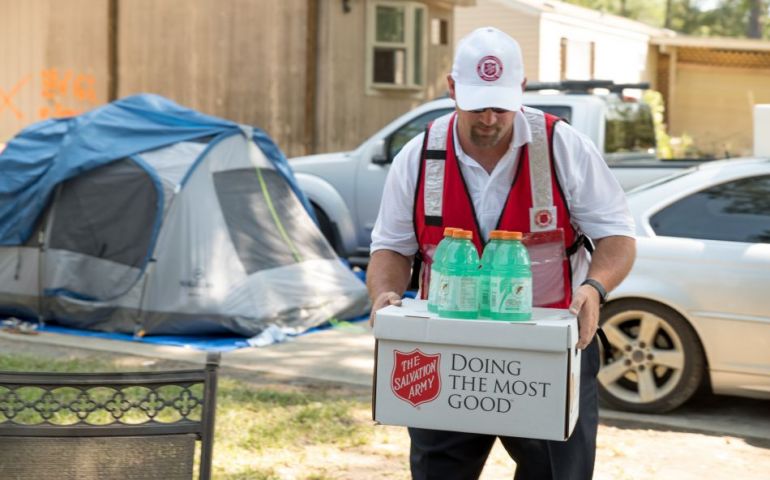 Atlanta, GA  – In the wake of the devastation caused by Hurricanes Harvey, Irma, Maria and Nate, The Salvation Army responded with one of the largest disaster relief operations in its history. Emergency Disaster Services (EDS) teams from across the United States and Canada immediately responded to the storms and provided food, hydration, and emotional and spiritual care to survivors and first responders.  After many weeks of active disaster response, The Salvation Army is transitioning into long-term recovery services in areas impacted by the first two storms – Harvey and Irma – in Texas, Florida and Georgia

The Salvation Army provided the following during its emergency disaster response phase in Texas:

“Since Hurricane Harvey made landfall on August 25th The Salvation Army has coordinated a massive response along the Texas coastline,” said Alvin Migues, Texas’s Emergency Disaster Services Director.  Following the storm, The Salvation Army set-up incident command teams to coordinate relief efforts in cities such as Beaumont/Port Arthur/Orange, Corpus Christi, Dallas-Fort Worth, Freeport, Galveston, Houston and Victoria. “Officers, staff and volunteers from throughout the United States have diligently served hurting communities, working from our mobile feeding units, and have delivered hot meals, hydration, and practical assistance to those affected by the storm,” Migues continued. “As the needs of survivors have gradually changed, The Salvation Army service has transitioned from emergency assistance to intermediate and long-term recovery. “

The Salvation Army provided the following during its emergency disaster response phase in Florida and Georgia:

In Florida, all The Salvation Army’s 47 local units mobilized as Hurricane Irma bore down on the state.  In the aftermath of the storm, disaster teams deployed quickly to the Florida Keys and set-up disaster relief commands in Fort Myers, Jacksonville, Miami/Fort Lauderdale, Naples and Sebring.

"We are committed to stand with our community partners in Florida to serve those affected by Irma.   To date, the Florida Division has distributed more than $4 million in direct aid, and at our disaster assistance centers, we are providing emergency financial assistance along with donated products that will help survivors as they navigate the road to recovery replacing items lost by hurricane Irma,” said Florida’s Emergency Disaster Services Director, Kevin Smith. “We were in these communities before Irma decided to take its final course. Floridians can count on The Salvation Army serving here long after Irma is no longer a national story."

Hurricane Maria in Puerto Rico and the U.S. Virgin Islands

In total, over 1,000,000 meals, drinks, and snacks have been distributed to those in need since the impact of Hurricane Maria.  The Salvation Army has also distributed almost 26,000 articles of clothing to individuals and families in need on the impacted islands.

Even as the response phases of Hurricanes Harvey and Irma end, The Salvation Army will continue to support families affected by the storms and to help rebuild communities in Florida, Georgia and Texas through long-term recovery.  Thanks to the generous support of donors, The Salvation Army has raised $57 million (as of October 13, 2017) for response and recovery efforts related to the 2017 hurricane season.