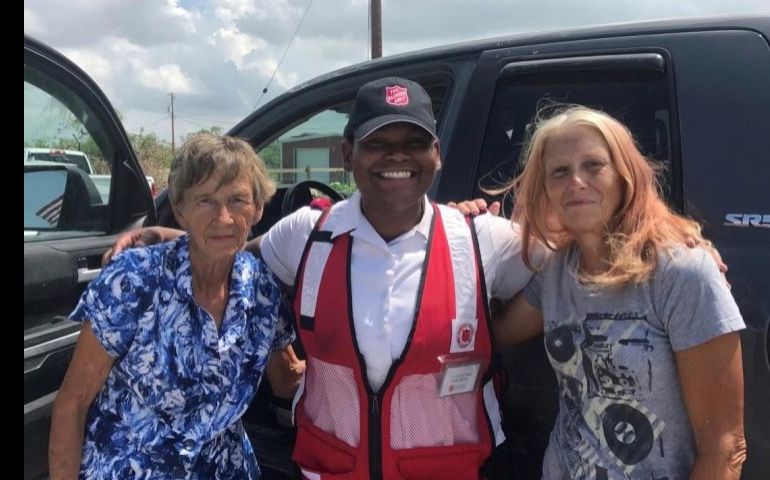 Bayside, Corpus Christi, TX (September 28, 2017) – What do you do when a major hurricane is on a collision course with your community and you have a farm full of animals?  You stay and pray. That was the exact situation facing Nancy Stroud, 73, and her daughter Michelle Berkley, as Hurricane Harvey made landfall on the Texas coastline.

The pair made the decision not to leave their animals, a herd of goats and rabbits, that Nancy raised to make a living. Surveying the damage in the aftermath of the storm and resulting tornadoes, Nancy lost 37 goats, all the rabbits, their barn, house, and several pieces of equipment. Michelle said, “I could hear a tornado that sounded like a train…I think it took out the barns. What the tornado missed, the hurricane finished off.”

The mother and daughter duo are currently staying on the farm, with tarps covering the gaping holes in their home. “Mom is 73 years old and is basically starting over,” said Michelle.

The Salvation Army has visited Bayside every day since the city became accessible after the storm, serving food, snacks, cold drinks, and providing emotional and spiritual care to residents.  Lt. Christmas Hargrove (pictured with Nancy and Michelle), who served and prayed with Nancy and Michelle while working on The Salvation Army mobile feeding unit said, “It has been a blessing to meet and serve the people of this community. Their faith and determination remind me of when William Booth said, ‘Work as if everything depended on work and pray as if everything depended upon prayer.’”

Local Fire Chief Bob Cramer remained in Bayside during the hurricane. “It was three days before any help could get to us,” said Chief Cramer, whose fire department crew worked for days to clear debris from the roads. “The Salvation Army has been a huge help and has restored everyone’s faith.”

Even though almost all of the homes in the community sustained considerable damage, many people have stayed in Bayside. Sharon Scott, Mayor of the city, lost her roof during the storm. “People don’t have anywhere to go so they are staying in their homes even though they really shouldn’t be,” she said. “Were it not for the support of The Salvation Army in Bayside people wouldn’t have anything to eat.” The power was out for several days and the only restaurant in town was damaged and remains closed.

Bayside is a small, close-knit community with a population of only 325 people.  Even though the property damage was extensive, there was no loss of life. For this, along with the continuing support of The Salvation Army, the community is thankful.

As of September 28, The Salvation Army has served 832,880 meals, 841,714 snacks, and 883,638 drinks statewide in response to Hurricane Harvey. Emotional Spiritual Care Officers have ministered to 49,741 first responders and survivors.