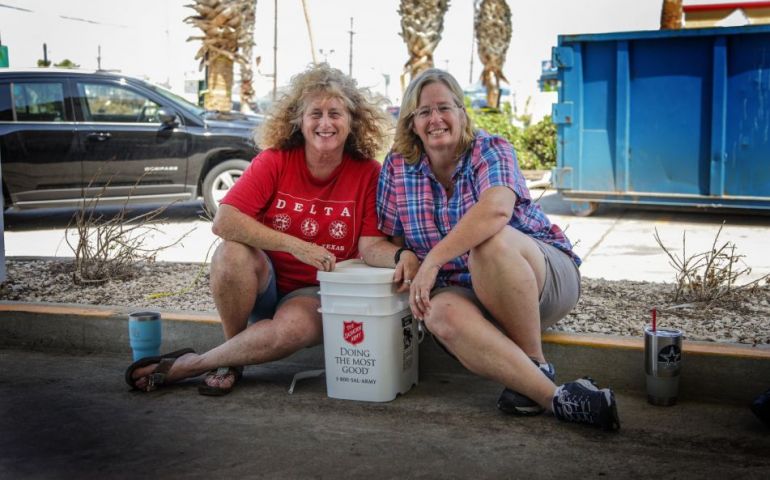 Port Aransas, Texas (September 26, 2017) - The mountain of debris lining the streets of Port Aransas grows larger each day as residents sift through what is left of their homes and work to salvage any of their belongings that remain. Hurricane Harvey devastated much of the idyllic barrier island community that found itself in the direct path of the storm just over a month ago.

The idea of life returning to normal on the island could not be further from the reality that residents are facing. Following mandatory evacuations in the immediate days following the storm, people have returned to find homes and businesses in ruin. The mound of debris along the highway and piled at every intersection indicates the full effect Harvey had on the people who call Port Aransas home; furniture, mattresses, personal belongings, toys, appliances, books, all waiting to be trashed.

The Salvation Army was one of the first agencies to bring any assistance to the island following the storm, initially working to support first responders and law enforcement. Mobile feeding units have delivered hot meals, snacks, and drinks while emotional and spiritual care officers have provided a listening ear and a shoulder to lean on. The Salvation Army has stationed a mobile kitchen at the intersection of Port St. and W. Avenue A. where residents have lined up for meals each day. In addition to a much-needed hot meal and perhaps some conversation with staff and volunteers, this has brought a welcome break and distraction from the grueling cleanup work.

Tracey Henderson, Manager of The Island Hotel in Port Aransas, said “It feels great to know that people from everywhere have come to help.” Tracey stayed on her farm during the hurricane as she did not want to leave her horses alone. She returned after the storm to find that all the rooms on the first floor of the hotel had been badly damaged. Tracey, along with Penny, a friend from Rockport who lost everything in her home, has been staying on the second floor of the hotel. Both ladies have received clean-up kits, assistance and daily meals from The Salvation Army.

Penny added, “It is amazing that perfect strangers have been willing to come alongside our community during this time. Thank you!”

As of September 26, The Salvation Army has served 798,839 meals, 792,713 snacks, and 838,552 drinks statewide in response to Hurricane Harvey. Emotional Spiritual Care Officers have spoken with 47,150 first responders and survivors.