Sunday School for Survivors and Spiritual Care in Corpus Christi 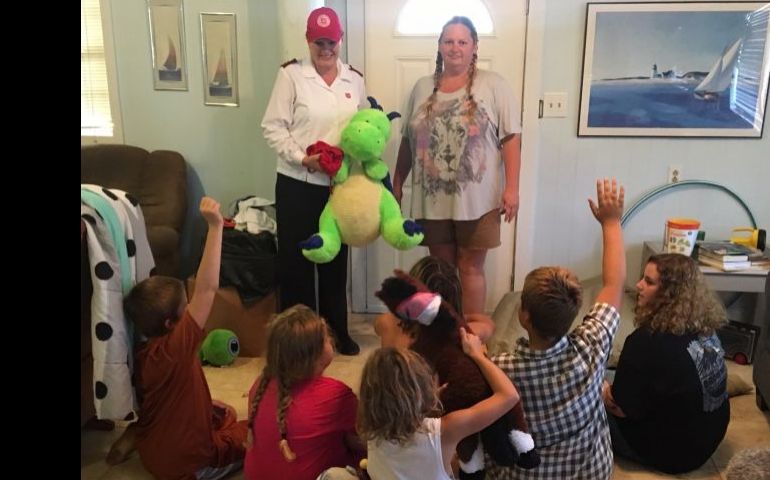 Corpus Christi, Texas (September 24, 2017) - In the aftermath of Hurricane Harvey, the residents of southeast Texas want so desperately to have life return to normal. However, the long and physically challenging process of cleaning and repairing damaged or destroyed homes takes a significant toll on the emotions and spirits of survivors.

Laura McGrady and her seven children have received hot meals, a bed, cleaning supplies, and clothing from The Salvation Army in the days since the storm.  In addition to practical necessities the family has also received some much-needed soul food—in the form of Sunday School.

Captain Jessie Chapman, from Tulsa, OK, visited the families temporary home and had the opportunity to lead a Sunday School class for Laura’s children, providing much-needed respite in the midst of the devastation. One child inquisitively asked Captain Chapman if she could tell him about Jesus. “I certainly can!” was the answer, and Captain Chapman continued with the plan of salvation.

Majors Matthew Riley and Raymond Pruitt also met with the family for a time of prayer and reflection.

At the end of another busy day of service, the mobile feeding unit team were just beginning the process of packing up when Derek rode up to them on his bike. The crew talked with many people as they served meals throughout the day, but the young man on his bicycle didn’t want anything to eat, instead he intently approached Frank Llamas, a volunteer from The Salvation Army in McAllen, Texas. “For some reason, he was drawn to me and asked me to pray with him,” said Frank. “I told him that he was significant and loved.”

After the two men prayed and talked for a few minutes, Derek gave Frank a gift – roses made from palm leaves that he had crafted. “He said he felt led to give them to me,” said Frank. “Derek told me that he felt the love of God as we prayed and that he recommitted his life to Christ.”

“Before he rode away, I gave him my card and told him that I am a pastor and would be praying for him in the coming days,” said Frank. Derek responded, “Thank you. I knew there was something special about you.”

Derek is one of the thousands of people who have received emotional and spiritual care from Salvation Army officers and trained volunteers as part of the relief efforts in the Corpus Christi area. At a time when stress levels and emotions are running high, many survivors simply seek a sympathetic ear to listen to their stories.  Encouraging words and prayers of staff and volunteers continue to be an integral part of The Salvation Army disaster response.

As of September 24, The Salvation Army has served 768,858 meals, 766,246 snacks, and 812,230 drinks statewide in response to Hurricane Harvey. Emotional Spiritual Care Officers have spoken with 46,265 first responders and survivors.