In The Face of Utter Destruction, Faith Stands Tall in Texas 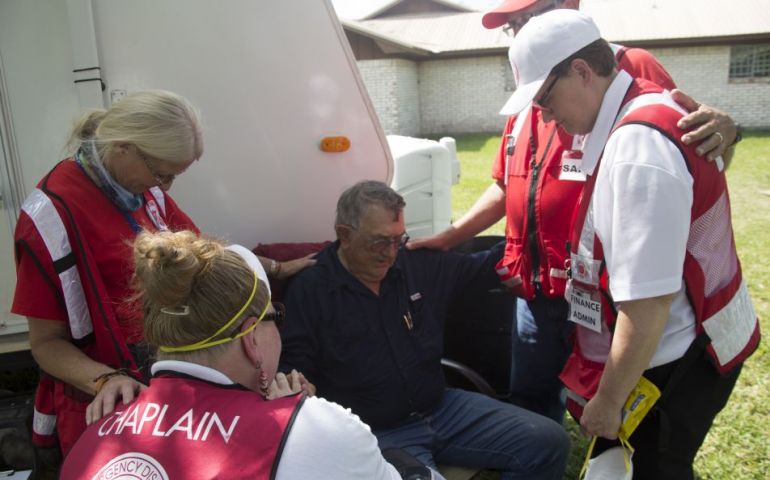 Victoria, Texas (September 20, 2017) - In the most rural outset of Victoria, Texas, George and Andrea Zdansky, 85 and 75 respectively, huddled together in their living room as Hurricane Harvey unleashed its fury, breaking tree limbs and claiming parts of the home for its own. During the storm, part of the roof over the living room flew off forcing the couple into the office until the chimney collapsed through the roof. Then they took refuge under the few stable roof beams in the kitchen – all the while their small shih tzu dogs cowered at their feet. When all was said and done, Harvey left at least $136,000 worth of damage.

Complicating the situation is the swarm of bees building honeycombs where the chimney fell through the roof. “We had to call a beekeeper to help us get rid of the colony,” said Amy Park, the Zdansky’s daughter-in-law. “Now we need to move the honeycomb before a new colony comes in.”

“These are just the material things,” George said sitting in the shade outside the 28-foot trailer he now calls home. “They can be replaced. The important thing is that my family is safe.” He stands tall, but George and his wife, along with their children and grandchildren, are left sorting through the damage and more than 30 years of memories.

“It’s hard because we have to toss so much and I was saddened because I remember sitting around the table laughing with the family. We had so many memories in the house.” said Park. “But the other night as we were cleaning up in the backyard, I looked around and we were all still laughing and sharing memories.” The family realized they didn’t need the house or its items to have everything they needed.

“We came to visit George and Andrea and their family because it’s important to make sure they are doing well in the aftermath of this tragedy,” said Major Michele Heaver. “It's important to let them know that people care.”

Even in the toughest of times, George remains strong in his faith. “God never gives you more than you can handle, but He pushed us to the limit this time.” He and his wife have plans to rebuild and start anew.