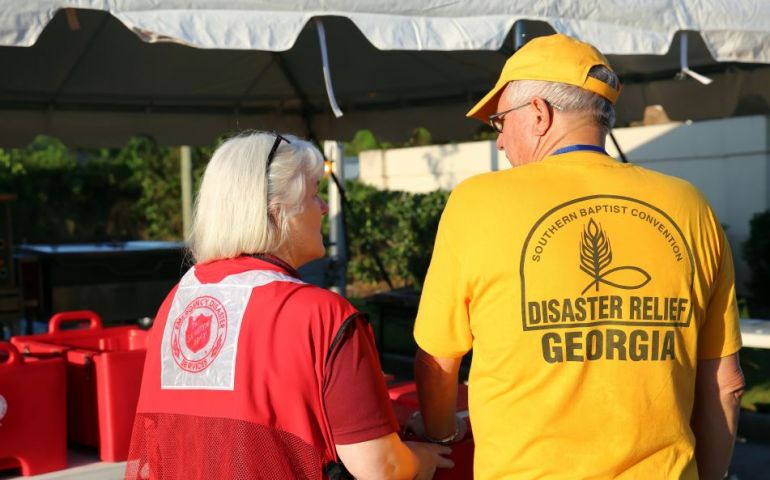 SAVANNAH, GA (September 15, 2017) - As evacuees from across Georgia return to rebuild and refurbish their homes, The Salvation Army of Georgia continues to assess and redeploy its disaster relief operations for the most effective service of people impacted by Hurricane Irma. As power is restored to increasing areas, many Salvation Army service locations in the northern and central parts of the state have been concluded.

Earlier this week, The Salvation Army moved its Incident Management Team (IMT) to Savannah, GA to be closer to, and more effectively serve, the most severely impacted coastal area. The IMT is tasked with coordinating The Salvation Army relief efforts state-wide, plus coordinating efforts with local and state authorities and partner agencies.

The Salvation Army is also distributing specially designed cleaning kits – often a welcome sign for those cleaning out flooded homes and businesses. “The Salvation Army was here twice a day all this week,” said Tybee Island resident Shirley Sessions. “They are always the first to arrive and the last to leave.” Now retired from the United Way “Hands-On Savannah,” Shirley has worked in partnership with The Salvation Army for years, adding, “The Salvation Army are like angels!”

Hurricane relief efforts continue in areas throughout the state wherever needed, including a request from Georgia State Operations Center (SOC) asking if someone could provide gluten-free meals for a special-needs child located in Sautee, GA. The boy’s family had their power cut off by the storm and it is anticipated to be off for at least a week. Lieutenant David Birks from Toccoa, GA, worked directly with the SOC to provide gluten-free food to the family until their power can be restored.

“It’s a great feeling to be able to help people in their time of need,” said Lt. Birks. “In The Salvation Army we just ask people two questions; What do you need, and how can we help.”

As people from across the state return to their homes in previously evacuated areas, they are mindful of how this is the second hurricane to hit their area in one year. Georgia Incident Management Team Commander Major Douglas McClure assures them, “Wherever you are, The Salvation Army will always be there to help you through the disasters of life; physical, emotional, and spiritual - 365 days of the year.”

Those who want to help people directly affected by recent hurricanes are asked to donate in the following ways: