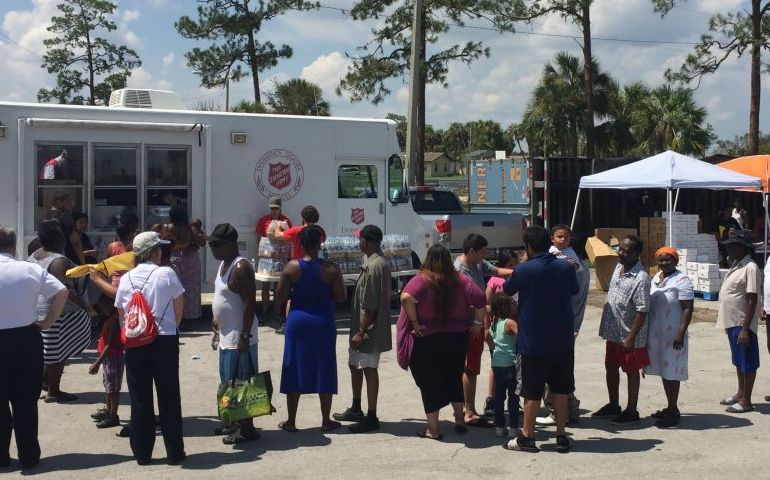 (Immokalee, Fla.) Sept. 14, 2017 -  The Southwest Florida heat is oppressive, 95 degrees in the shade, coupled with the humidity, is enough to overwhelm even a seasoned farm worker.

Biany was doing everything she could to stay cool: She had a makeshift cardboard fan in her hand, trying her best to cool herself even as beads of sweat dripped from her forehead. She was one of the hundreds of people who waited in line for lunch from a Salvation Army mobile kitchen – the first hot meal she’s had in almost a week.

Biany is used to heat – she’s a migrant farm worker – her job is to pick tomatoes, zucchinis, oranges.

“Whatever is in season,” she said.

Biany and her family live in Farmworker Village, a subsidized housing community just outside of Immokalee – about an hour’s drive from Naples.

Biany hasn’t worked in more than three weeks – not because she doesn’t want to, but because she hasn’t been able to.

“A few weeks ago, it was rainy,” she said. “Now, we have the hurricane. I feel sad. The money is gone and I’m behind on my bills.”

The Salvation Army served more than 1,000 meals at Farmworker Village on Thursday. For Biany’s daughter, Chrystal, the hot meal was a welcomed relief.

“I’ve been eating Doritos and snacks since before the storm,” she said.

Another resident, Roberta, cradled her four-month-old granddaughter in her arms as she waited for lunch.

“We are usually forgotten,” Roberta said, “and the last to be served.”

At the migrant camp on Thursday, the least were served first.

“You all have been like angels coming to rescue us with water and food,” Biany said. “Thank you.”

Teams are now transitioning into response, establishing staging areas across the state, which include Naples, Fort Myers, Key West and Keystone Heights.

All 47 Salvation Army units – from Pensacola to south Florida – are assisting and serving residents in need.

The Salvation Army has more than 3,000 trained volunteers and staff in Florida, ready to offer a warm meal, bottled water, coffee and offer emotional and spiritual care.

The best way to help survivors and relief workers is to make a financial contribution. Monetary donations allow disaster responders to immediately meet the specific needs of disaster survivors as the need continues to be assessed.

The Salvation Army asks people who want to help those directly affected by the storm to visit helpsalvationarmy.org, call 1-800-SAL-ARMY or text “Storm” to 51555.

At this point, in-kind donations are not being accepted.  Used clothing and used furniture are seldom required during an incident.  However, these gifts are vitally important in supporting the day-to-day work of your local Salvation Army. Please consider giving these items to your local Salvation Army Family Store or dial 1-800-SA-TRUCK (1-800-728-7825).