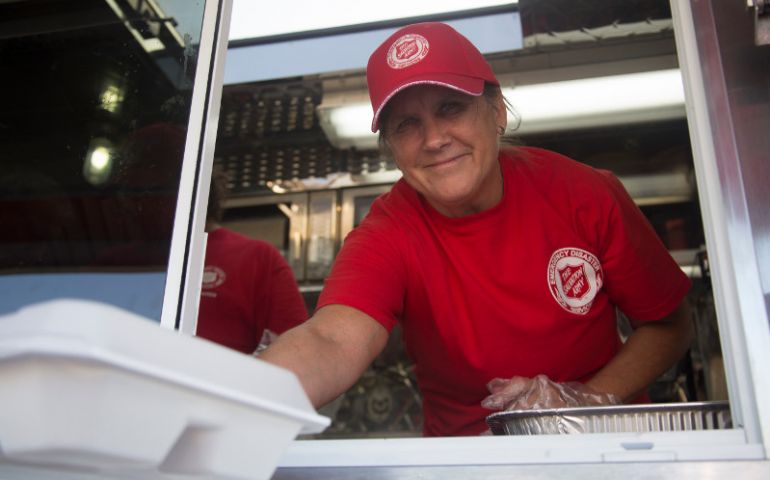 Dallas, Texas (September 14, 2017) – As Texas braced itself for Hurricane Harvey making landfall on the night of August 25, The Salvation Army’s statewide preparation for the anticipated massive response effort was well underway. Now 19 days after the storm made landfall, The Salvation Army has served more than 500,000 meals to first responders and survivors of the storm in Texas.

At the peak of response, 96 Salvation Army mobile feeding units were deployed throughout southeast Texas, each with an average capacity to serve 1,000 meals per day. Today, more than 70 units and relief teams remain hard at work preparing and delivering hot meals, snacks and drinks to communities in need.

Each mobile feeding unit requires a trained Salvation Army crew to operate and deliver service. Employees and volunteers have given more than 65,000 hours of selfless service as part of the relief effort so far. A standard Salvation Army disaster deployment is 14 days and relief crews were on the ground within hours of the storm’s landfall, ready to provide assistance as first responders and law enforcement began assessing damage and offering emergency assistance.

A hot meal served with a smile from a Salvation Army volunteer, and a word of encouragement or a prayer from an emotional and spiritual care officer can mean so much. The value of a hot meal was summed up in a response received from one member of the Texas Military Forces who was working long hours in Victoria, Texas. “We had been eating very badly, sometimes not having a meal at all as we worked to help our fellow Texans. The meals we received from The Salvation Army were outstanding and we would like to honor that crew. They saved our backsides!”

As of Sept. 13, The Salvation Army has served 508,607 meals, 468,712 snacks, and 570,307 drinks statewide in response to Hurricane Harvey. Emotional Spiritual Care Officers have spoken with 27,167 first responders and survivors.