Bringing Light to Those Suffering from Hurricane Harvey 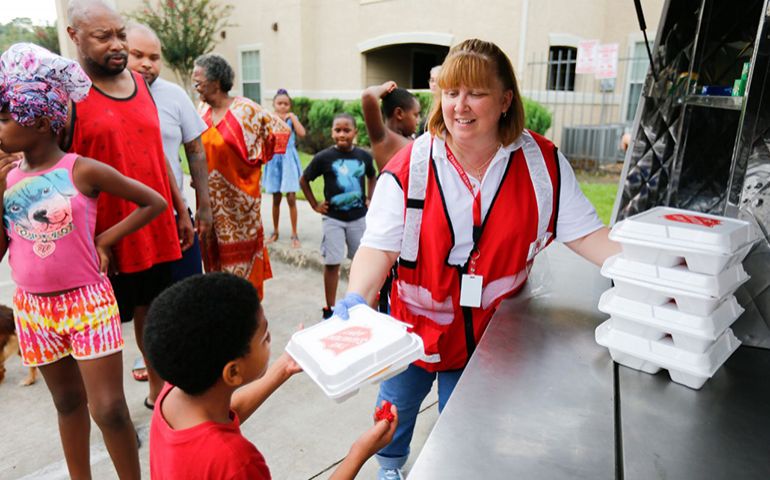 Houston, Texas (September 8, 2017) – The two-person Salvation Army crew from Kentucky rolled into Houston after dark on August 29. Just as they were ready to head out on their mobile feeding unit the following morning, residents in the Redwood Heights apartments were seeing the sun – and dry ground – for the first time in days. Their day was made a little brighter when Lt. Jane Monroe and Capt. Sarah Quinn arrived in their parking lot in north Houston.

Before the flood waters receded, rainfall from Hurricane Harvey had covered cars in the parking area and caused a loss of electricity in the 96-unit apartment community. The residents felt stranded and alone. Lt. Monroe and Capt. Quinn were met with smiles and cheers when they arrived on Wednesday morning. “They said we were the first ones on the scene. No one checked on them, and they felt forgotten,” said Lt. Monroe.

The Redwood Heights residents appreciated the food and the water, “but what they really needed was for someone to listen. To be present for them to talk.” As officers of The Salvation Army and skilled disaster personnel, Monroe and Quinn are trained in the “ministry of presence,” with the ability to comfort those in stressful times.

After they spent a few hours with the Redwood Heights residents, Monroe and Quinn compiled a list of supplies needed by residents and returned at dinner time with many of the items, including hygiene kits, as well as more food and water. “We ran out sandwiches and hot dogs, and burgers, so now we are passing out MREs (meals ready to eat),” said Capt. Quinn.

As of Sept. 7, The Salvation Army has served 311,955 meals, 255,522 snacks, and 321,093 drinks statewide in response to Hurricane Harvey. Emotional Spiritual Care Officers have spoken with 21,411 first responders and survivors; employees and volunteers have provided 42,938 hours of service.

“It brings us great joy to be able to help them when they felt like no one cared.”