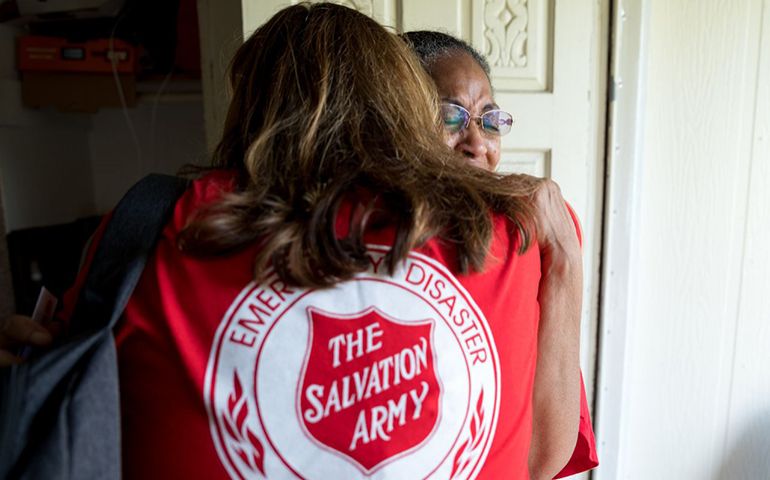 Social media transcended rain, flood waters, and 1,800 miles to bring much needed hurricane relief to one Houston community with help from The Salvation Army. It started with a message to The Salvation Army of Greater Houston’s Facebook page.

“Can 77044 zip code get some help from Salvation Army? C.E. King/Tidwell area need hot meal truck in their neighborhood. These families have lost everything and do not have transportation to a help center and no one has come through with meals for these families.”

Alexandra Ferber, a member of The Salvation Army of Greater Houston’s Public Information Team, worked with colleagues to dispatch Salvation Army officers to the neighborhood. They brought food for dinner and offered emotional and spiritual care.

“A few hours later I noticed another message on Facebook from the Kizzee family thanking us for coming out, but I wanted to do more,” said Alexandra.  “Then I heard about the guys from North Carolina and I made sure they got their Fern Forrest Drive address.”

Three chefs from North Carolina were on the last leg of an 18 hour drive to Houston when they picked up the phone and turned to The Salvation Army of Greater Houston.  They were hauling enough food to make tacos for a thousand people.

“As soon as we reached out to The Salvation Army the response was immediate. ‘We’ll find somewhere for you to go,’’ said Steve Hawley of Raleigh, North Carolina.

A few days earlier, Steve and his friends Danny Hoots and Ray Chow, launched a GoFundMe crowdfunding campaign online and turned to their friends and family on Facebook to raise $3,500 to support their relief plan. They were blown away from the response on social media. They hurried to buy groceries and pack the truck.

“I’m not even going to pretend to understand what these families are going through. I can’t even imagine,” Ray said. “But as chefs we have a skill set. We can come and provide a meal.”

Like many neighborhoods in Houston, Fern Forrest Drive was lined with furniture, floor boards and appliances when the chefs arrived. Sandra Kizzee and her adult children had spent the morning gutting their flooded home and assessing the damage.

“We lost a lot of stuff,” Sandra said as she walked through the garage, pointing to the washer and dryer. “When The Salvation Army came out, that was a blessing,” Sandra said.

The Kizzee’s had been rescued by boat as Hurricane Harvey churned over the city.  They stayed with friends until the rain stopped and the flood waters receded. When Sandra returned home, her car was ruined, much of her home and all of its contents were unsalvageable.

Hungry and tired, overwhelmed by the task ahead, it was Sandra’s daughter Kera, who had sent The Salvation Army of Greater Houston’s Facebook page asking for a hot meal. Little did she know that it would result in a neighborhood cook-out the following day.

“I wanted to go out in person to tell Sandra and her family about the chefs from North Carolina,” said Alexandra. “I wanted her to know that The Salvation Army is here to help in any way we can,” she added.

Armed with cleaning kits for the neighborhood and some special news, Alexandra and her colleagues explained to Sandra who was down the street cooking up comfort food and how it came to be.

“Thank you all so much,” Sandra said with tears in her eyes.

The smell of tacos wafted down Fern Forrest Drive and soon the mobile cooking operation was surrounded by Sandra and dozens of other residents.  A beautiful afternoon brought together thanks to family, friends, Facebook and The Salvation Army.

“Social media is good for something!” she said, this time with a smile.