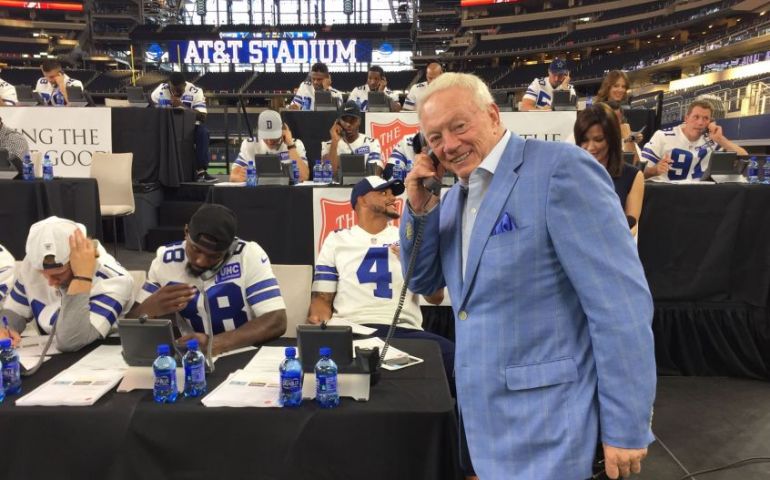 DALLAS (September 1, 2017) - The Dallas Cowboys once again demonstrated their love and commitment to those in dire need when they hosted a fundraising telethon for The Salvation Army’s Hurricane Harvey relief efforts for those impacted across South Texas.

On Thursday, August 31, the Cowboys used a practice session at AT&T Stadium that was organized to replace their canceled pre-season game against the Houston Texans to encourage CBS-11 television viewers to make monetary donations to help provide needed services.

Current Cowboys players including Dak Prescott and Jason Witten, as well as Pro-Football Hall-of-Famers Emmitt Smith and Tony Dorsett, along with other current and former players, answered calls from viewers. A highlight of the telethon was when Dallas Cowboys wide receiver Dez Bryant, who on Tuesday made a $50,000 donation to The Salvation Army relief efforts answered the phone and found Dallas Cowboys owner Jerry Jones on the other end. Jones made a generous $1 million dollar donation which Bryant called a “blessing.”  In 90-minutes’ time, compassionate citizens had contributed $2.3 million to the relief effort.

Earlier in the day, more than 30 Dallas Cowboys players, along with head coach Jason Garrett, delivered 300,000 articles of new clothing worth over half a million dollars to a Salvation Army warehouse in Dallas. The players helped unload the tractor-trailer full of boxes of clothing to be distributed to those affected by the hurricane and resultant storms that ravaged and flooded much of South Texas.