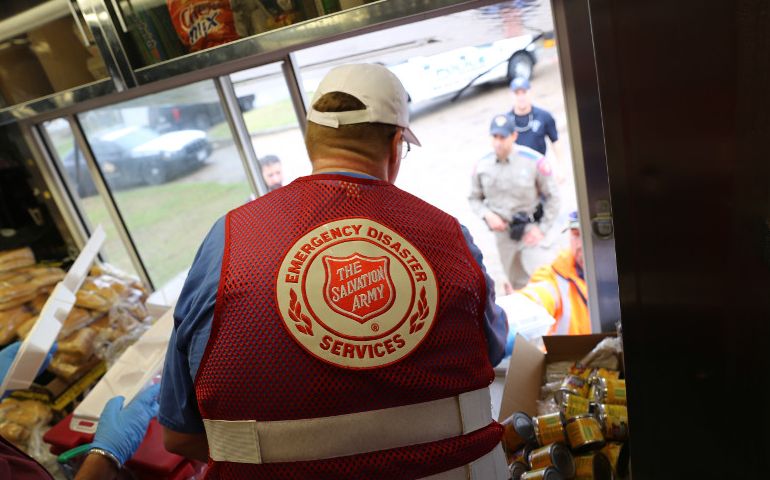 Dallas, Texas (August 31, 2017) – The fleet of 11 Salvation Army mobile kitchens currently deployed to Houston took to the streets Wednesday, to deliver food, drinks and emotional and spiritual care to those in need. Response teams served meals in several communities that prior to their visit had not received any assistance and The Salvation Army was the first agency to show up.

One such community was Redwood Heights, Houston. Residents explained that today was the first time the water had receded sufficiently for them to venture out of their homes since Monday. The Salvation Army mobile kitchen was a welcome sight as it pulled into the neighborhood to serve lunch. Additional mobile kitchens are headed for Houston and it is anticipated that food delivery will continue to expand in the coming days as new areas of the city become accessible.

“While serving at lunch time several people told us of emergency needs that included hygiene products and toiletries,” said Captain Sarah Quinn, from The Salvation Army in Henderson, KY, who has been deployed to serve in Houston for 12 days. “We returned to Incident Command for more food and were able to collect all of the items requested by the community and deliver them when we returned at dinner time,” she said. “The people were so pleased to see us and happy to receive a meal and some assistance” said Lt. Jane Munroe, of Ashland, KY. “I pray that they not only received a meal but also a sense of hope and encouragement for the days ahead.”

Two shower units brought to Houston from Florida were delivered and installed at the George R. Brown Convention Center today. The shelter, with the capacity to shelter up to 10,000 people will utilize the shower units for first responders and medical personnel. Captains Rojelio and Rebecca Galabeas, Commanding Officers of The Salvation Army Houston Temple Corps, spent time this afternoon talking and praying with evacuees in the shelter.

Six Salvation Army locations in Houston are continuing to provide emergency shelter to families and individuals who have evacuated their homes:

In the Corpus Christi/Coastal Bend area, feeding operations continue in the following locations:

The Salvation Army has also been requested to be responsible for food service at the Red Cross shelter at Tuloso-Midway dome and for the 500 evacuees who will be returning by bus to Corpus Christi in the coming days.