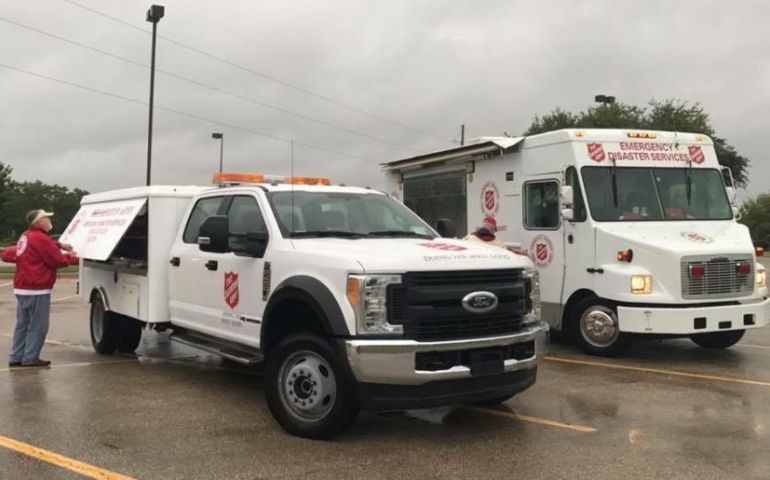 Dallas, Texas (August 26, 2017) – Salvation Army disaster teams from Texas are traveling the length and breadth of the Lone Star State headed to the staging area in San Antonio following Harvey making landfall as a Category 4 hurricane. From there they will be deployed to the areas of greatest need as the devastation caused by the storm becomes apparent.

In Corpus Christi, Salvation Army staff spent the night alongside first responders and law enforcement personnel at the FEMA dome. Led by Captain Patrick Gesner, the team served coffee and meals throughout the day. "We ventured out in the early hours and it appeared that The Salvation Army building was intact. We collected some extra food from our freezer and fired up the generator on the mobile kitchen.," said Captain Gesner. "We've already been serving coffee this morning and the police and first responders have expressed how pleased they are we are here. Our focus today will be cooking and serving meals at the FEMA dome while the city assessment is taking place."

Captain Gesner and his team, including Gustavo Perez, Business Manager, and Yamid Duarte, Communications Director, delivered food to one of the city shelters at Robstown Seale Junior High on Saturday morning. “We delivered hot dogs and about 900 bottles of water to the shelter which was housing around 50 people,” said Duarte. “Our team, although exhausted responded to as many requests for assistance as possible. We were excited to see the mobile kitchen from the Laredo Corps arrive this afternoon!” 1,200 meals, 300 snacks, and 45 cases of water were distributed in Corpus Christi on Saturday.

The Texas Division fleet of 34 mobile kitchens will be joined by 10 units from the neighboring Oklahoma Arkansas Division along with an Incident Management Team. The Florida Division has deployed two mobile bunk houses and two shower units to Texas.

Flooding remains a major concern for the coming days with torrential rain forecast as the storm stalls over South Texas. A Salvation Army team and two feeding units from Austin will visit hard-hit Victoria first thing on Sunday morning as the needs assessment continues. It is expected that a number of mobile kitchens will be deployed to affected communities along the coastline on Sunday while others remain in anticipation of service needs in San Antonio where many evacuees have sought shelter.

To make a financial donation to support the Hurricane Harvey relief efforts please go to www.helpsalvationarmy.org or call 1-800- SAL-ARMY.