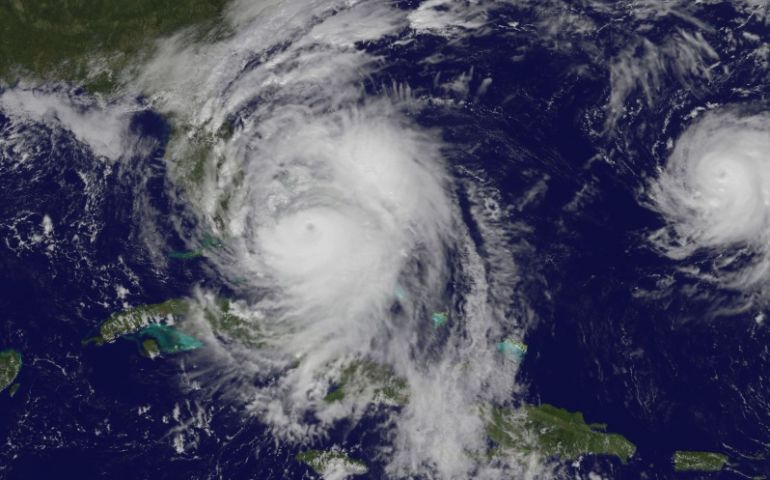 The activation level of the International SATERN SSB Net that meets Monday through Saturday on 14.265 MHz at 1100 (ET) will be increased from its’ standard DELTA I (Training Mode) whenever a major hurricane (Category 3, 4 or 5) is forecast to make landfall within 12 to 24 hours in the Caribbean, Central America, northern part of South America or the continental United States includig the East or Gulf Coasts.

Besides storm strength, other factors to be considered in an activation decision are the conditions and scope of damage expected in the impact area(s) and requests for an activation by partners, official or amateur radio sources or by The Salvation Army.

Activation may include not only activation of the International SATERN SSB Net, but a request for SATERN operators to monitor or assist partners such as the Hurricane Watch Net or the VoIP Hurricane Net.  The purpose for monitoring partner Nets would be to provide them with an additional resource for handling Health & Welfare messages coming out of an impacted area.  Health & Welfare messages are messages from a person in a disaster impact area that tell family and friends outside of that area about their condition and situation.

It is possible that one or more SATERN operators may be appointed to be a Liaison to one or more of these partners.  It is also possible, in some cases, that monitoring of these nets may be done in lieu of an activation of the International SATERN SSB Net, especially for storms that are expected to have a serious impact but not expected to be a major hurricane.

Notification of all activations will be published through various media including SATERN.org, the national EDS website, the national SATERN GOOGLE groups, on-the-air announcements on various SATERN Nets and by email to key Salvation Army leaders and, when appropriate, the SATERN newsletter list and to our domestic and international partners such as the Hurricane Watch Net, the VoIP Hurricane Net, WX4NHC (the amateur radio station at the National Hurricane Center), the American Radio Relay League (ARRL – the national amateur radio organization) and Region 2 of the International Amateur Radio Union (IARU.) which covers North, Central and South Americas.

According to researchers and meteorolgists at Colorado State University (CSU) and the National Oceanic and Atmospherica Administration (NOAA), the 2017 Atlantic Basin Hurricane Season may be much busier than initially thought.  On May 25, 2017, NOAA predicted that the 2017 Atlantic Hurricane Season would produce 11 to 17 named storms, with between 5 and 9 of those being hurricanes, with 2 to 4 of those being major (Category 3, 4 or 5) hurricanes.  The multi-year seasonal average is 12 named storms with 6 hurricanes, including 3 major hurricanes.

Researchers at Colorado State University (CSU) have upgraded their forecast for the 2017 Atlantic Basin Hurricane Season three times since their initial April forecast.  The latest forecast that came out on August 4, 2017, predicts up to 16 named storms, with up to 8 of them being hurricanes and up to 3 of those being major hurricanes.

Comparison Of The Forecasts Released Since April 2017

The chances of a major hurricane making landfall in the Atlantic Basin have also risen since the initial April forecast.

Comparison Of Landfall Forecasts Since April 2017

A similar forecast of landfall probabilities is available for each coastal state in the Gulf of Mexico and East Coast and several island nations and U.S. Territories in the Caribbean at http://www.e-transit.org/hurricane.

Both NOAA and CSU agree that the change in thinking is the result of a decrease in the expectation of a moderate El Nino event in the Pacific.  El Nino events are when the central and eastern Pacific have warmer than normal temperatures which typically result in cooler Atlantic temperatures that tend to depress hurricane activity in the Atlantic Basin.  Although climate models are showing a great deal of uncertainty, forecasters believe that a weak or non-existent El Nino condition will occur in the Pacific.  This would potentially result in warmer Atlantic temperatures that are more conducive to hurricane development.

People interested in the science behind this forecast should read the full Colorado State University forecast which is available at http://tropical.colostate.edu/ and the NOAA press release at http://www.noaa.gov/media-release/above-normal-atlantic-hurricane-season-is-most-likely-year.