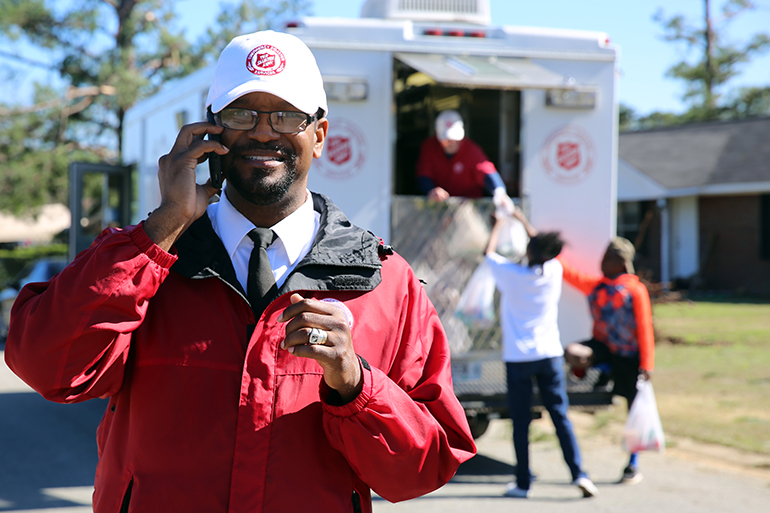 Within minutes of the first tornadoes touching down, The Salvation Army Emergency Disaster Response (EDS) teams deployed multiple mobile feeding units throughout affected areas. Over 19,500 meals, snacks, and drinks were provided, as well as emotional and spiritual care, to thousands of survivors throughout impacted areas.

According to the National Weather Service, the tornado outbreak in South Georgia was one of the largest on record. Twenty tornadoes hit Georgia within a three-day period between January 21 and 23, tearing a 70-mile path through five Georgia counties. Over 15,000 families were affected by the storms, with over 500 homes destroyed and another 1,700 reporting damage.

"From day one, The Salvation Army has been helping individuals and families who suffered due to the tornadoes" said Lanita Lloyd, Director of Emergency Disaster Services for The Salvation Army of Georgia. "These events have affected our communities – where we live and serve every day – our neighbors. We are committed to supporting long-term recovery efforts throughout Georgia."

The Albany and Dougherty County areas were hit hardest by the tornadoes. As the disaster operation eventually transitioned from immediate response to long-term recovery, The Albany Salvation Army joined with local churches, businesses, and other organizations to establish a Long-Term Recovery Group to support relief efforts as a team. In those affected areas where a long-term recovery group does not exist, The Salvation Army will continue to assess and help fulfill the needs of impacted families.

It is anticipated that the long-term recovery will last through the summer, or until available funds run out. To date, The Salvation Army has raised over $300,000 for immediate and long-term recovery efforts. According to Major Kelley English, The Salvation Army officer for Albany, GA, the need still outweighs the resources available and any continued support would greatly help affected South Georgia communities in their quest to return to normal.

“Some people have exhausted their FEMA and insurance money to help get them back to normal, or had no money at all,” said Major English. “It’s great to be able to help people in their time of need in a real, tangible, and significant way.”

The Salvation Army’s focus is to help with unmet needs, which are those not obtained through FEMA, insurance, and other similar sources. Qualified households are able to obtain up to $3,000 as reimbursement for expenses like home repair, appliance replacement, medicine, temporary housing, and other disaster-related expenses.

"Long-term recovery is a difficult path. The process of rebuilding homes and lives takes time and patience," said Major English. "The Salvation Army will work with local governments, organizations and community members to make sure every individual and family affected by these tornadoes is helped."

Those seeking assistance for tornado-related expenses are asked to contact The Salvation Army of Albany, GA at 229-435-1428.

The best way to help people before, during, and through the long-term recovery efforts of a disaster is to make a financial donation. Financial donations enable disaster responders and aid providers to meet the specific needs of disaster survivors when and where they are needed most.

Financial donations go directly toward long-term relief efforts for those affected by the 2017 South Georgia tornadoes and can be made;