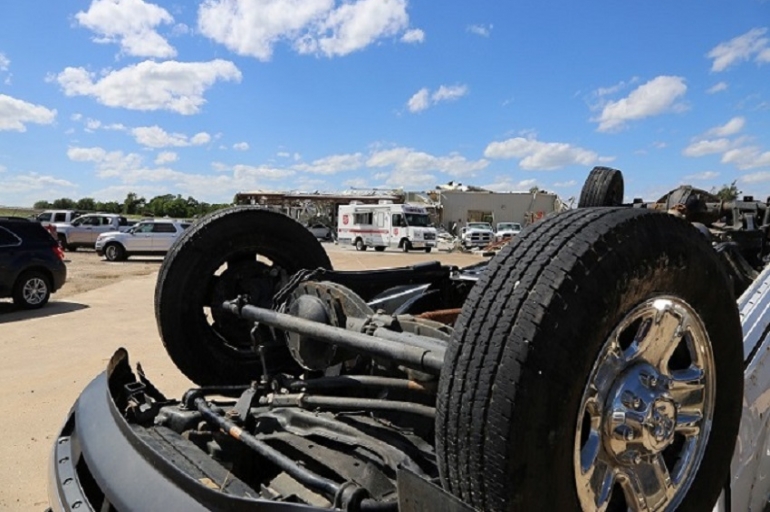 A staging area was established at a Canton car dealership where The Salvation Army disaster teams prepared and distributed meals and snacks to law enforcement and responders who lined up on the frontage road. Monday was supposed to be an exciting day for the dealership as they were scheduled to open a brand new showroom. Instead, the buildings were torn apart by the tornado with cars and trucks flipped and strewn all around the property.

The Salvation Army EDS team from Lewisville served meals to the line of trucks at Sunday lunchtime having been the first Salvation Army unit to arrive in the area at 10:30 PM on Saturday. "We spent Saturday night serving coffee and refreshments at the Canton High School where a hastily prepared triage was set up for those injured by the tornado," said Stephen Thomas, the Director of the Lewisville Service Center and disaster volunteer. "We served more than 300 people last night, many who were injured and in need of help after the storms."

The Rapid Response Unit from Granbury, operated by members of the Women's Service League of Hood County, provided roving support on Sunday in addition to two other mobile kitchens from the DFW area. Water and clean up kits were delivered in preparation for distribution on Monday at three points of distribution in the area - Canton High School, Walmart, and the First Methodist Church at 600 Buffalo St, in Canton. Two full size mobile kitchens will continue service on Monday along with the RRU.

Additional volunteers are not needed at this time. The best way to support the ongoing Salvation Army response efforts is to make a financial donation by calling 1-800-SAL-ARMY, or online at give.salvationarmyusa.org/cantontornado.