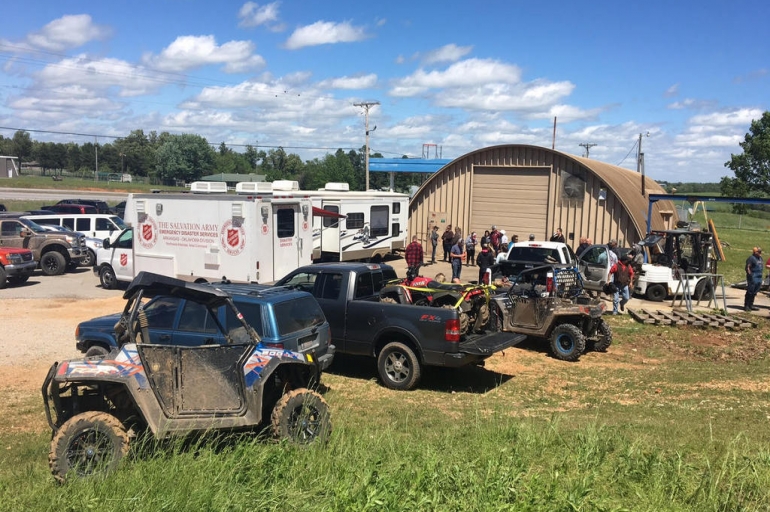 The Salvation Army of Northwest Arkansas is on scene providing Emotional and Spiritual Care as well as meals, snacks, and hydration to responders involved in a search and recovery effort in Madison County, Arkansas.   At least 15 people were killed and dozens more injured as storms tore through Texas, Missouri, Arkansas, Oklahoma and Mississippi, spawning tornadoes and floods that left a trail of devastation.  Governor Hutchinson has declared a State of Emergency for Arkansas in response to the severe storms and flooding throughout the state.

“Our prayers go out to the families who lost loved ones in the heavy rain and storms...I also thank our first responders who have worked tirelessly to provide assistance," Governor Hutchinson said. “I declared a State of Emergency for Arkansas to ensure that we have in place available resources to assist counties affected. The Arkansas Department of Emergency Management continues to coordinate with counties on damage assessments.”

In Arkansas, the search continued today for two children separated from their mother after their car was swept away by flood waters on Saturday afternoon. The search switched to one of “recovery” rather than “rescue” for the 4-year-old and 18-month-old children.  The mother was able to escape the car but couldn’t save the children in the fast current after she left the vehicle.

On Monday morning, Major Dan Matthews, Area Commander for Northwest Arkansas Area Command, was contacted to aid Search and Recovery Efforts.  Major Matthews states "We are serving the search and rescue teams here in Madison County, while several hundred people are out searching today. We have prayed with some of the grief-stricken family members as well. Our plan is to be on scene supporting the responders and family members until the search is complete.  Please keep the family in prayer."

Please be in prayer for our officers, Major Matthews as well as Lt. Yonathan Arrouqi, Fayetteville Corps Officer, who are there to be a beacon of hope and light, for the recovery team as they are facing a daunting task.   Pray for all families who have lost loved ones and let The Salvation Army provide as much comfort as possible during the days ahead.