The Salvation Army of Atlanta Responds to I-85 Bridge Collapse 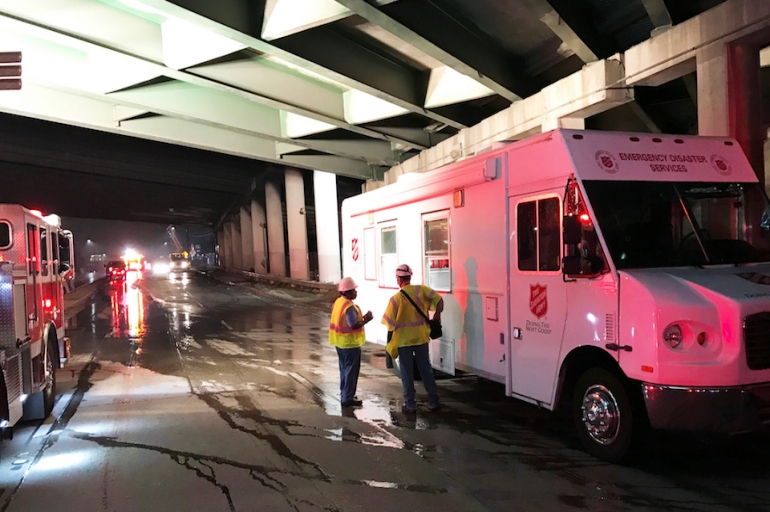 ATLANTA, GA (March 31, 2017) – The Salvation Army Metro Atlanta Command responded to a collapsed bridge on I-85 caused by an extensive fire by serving over 200 meals, snacks, and drinks to emergency personnel. A Salvation Army canteen (mobile feeding kitchen) from the Metro Atlanta Area Command’s Red Shield Shelter was deployed on site from 10:00pm to 4:00am.

“We were in continuous contact with GEMA and the Fulton County Emergency Management team,” said Major Jack Butler, Emergency Disaster Director for The Salvation Army’s Georgia Division. “They were delighted we were there to provide services to emergency personnel.”

Service efforts to emergency personnel extended as needed throughout the night until 4:00am, at which time Fulton Emergency Management thanked The Salvation Army for their timely service. In the times of disaster, Salvation Army officers and staff provide food, hydration, spiritual care, and if needed, shelter for impacted individuals, families, and emergency personnel. Mobile kitchens and canteen units are capable of reaching disaster sites quickly to serve those in need.

“We were able to serve fire and police as they contained the disaster and made the area safe,” said Sergeant Janeane Schmidt, Director of The Salvation Army’s Metro Atlanta Red Shield Shelter. “The city of Atlanta can rest assured that The Salvation Army stands ready to help at a moment’s notice to help in times of need.”