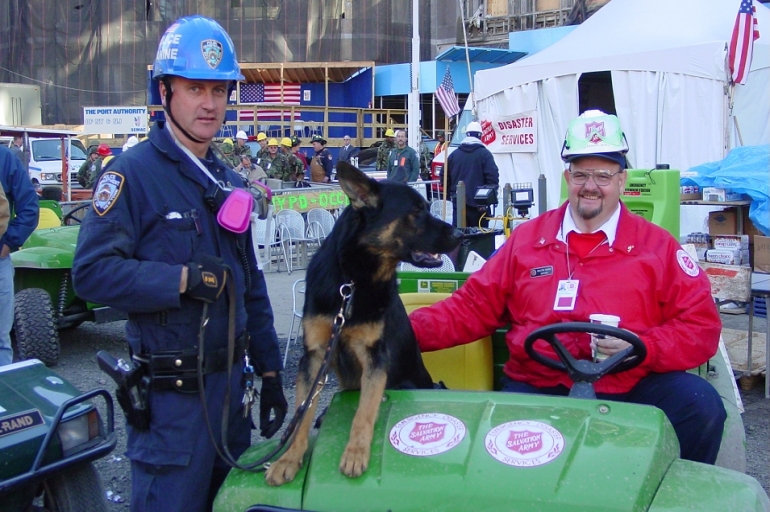 Reprinted from The Salvation Army's National Blog.  For the complete story of The Salvation Army's response to the 9-11 terrorist attacks in New York, Washington DC, Pennsylvania, and Canada, where hundreds of international airline flights were diverted, watch "Compassion Under Fire," the complete story of the services delivered on that tragic day and in the weeks and months to come.

Alexandria, VA - Fifteen years ago, America saw one of the most horrific acts of violence in our history. We all remember where we were when it happened. I was just ending second period in my junior year of high school in Queens, New York. My parents were on their way into the city for work when they saw both towers on fire. Little did I know at the time that The Salvation Army was right there in our city, at Ground Zero serving.

When tragedy struck, The Salvation Army was one of the first relief agencies to arrive at Ground Zero, and we were closely involved with the recovery process for survivors in New York, Pennsylvania and Washington, D.C. following the tragic events.  In the months and years that followed, we helped thousands of people impacted by the attacks with practical assistance as well as spiritual and emotional care. We served more than 3 million meals thanks to $90 million in donations and 1 million hours of service from 39,000 Salvation Army officers, staff and volunteers.

Many Salvation Army volunteers came from across the country to serve during 9/11. Major Evelyn Chavez, our property secretary at our Western Territorial Headquarters, described her time there in a journal entry she kept while serving:

“The Police Department, Fire Department, Port Authority and construction workers  are  so amazed that we would come all the way from San Francisco just to help them.  I’m amazed at their stamina and sense of purpose.  To stand at the edge of ground zero is indescribable.  The television  really minimizes and miniaturizes what is really here.  It’s like when you look at the Grand Canyon and it is bigger than life.  So is this except it’s death.  There are thousands of stories…..I never get used to the way our ‘“little red shield”’ allows entrance to places. It is the symbol of acceptance.  I go through 7 police check points to get into ground zero.  They see the shield and wave me on.   It is truly a symbol blessed by God.”

After the attack in New York, the New Jersey Division of The Salvation Army played a major role in relief efforts in New York by setting up temporary shelters, feeding stations and pastoral counseling services, providing a mobile canteen at the NYC Medical Examiner's Office, among other services.

Our National Capital and Virginia Division of The Salvation Army provided aid and comfort to relief workers and survivors at the Pentagon site, serving meals and drinks while offering spiritual counseling and support.

After the crash of United Flight #93 outside Shanksville, PA, our Western Pennsylvania Division served nearly 20,000 meals, performed 5 worship services and provided a total of 13,000 volunteer hours.

We are grateful for all our teams who came together and during this tragedy.

We caught up with Major Chavez who had this to say:  “15 years later, I am flooded with the pictures, the memories, the lives that were impacted on this day that America will never forget.  We are truly one nation, under God, indivisible and united in the purpose and mission of helping each other –we are Americans strong and free.

Many Americans will devote themselves to a charitable cause to honor the spirit of service that arose in response to 9/11. If you’re looking to find a way to give back, consider contacting your local Salvation Army to see how you can help them support your community.