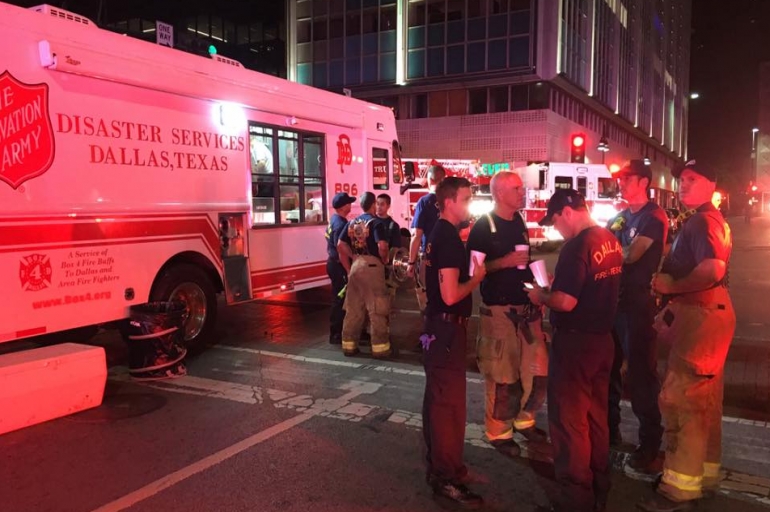 At approximately 9 pm on Thursday, July 7, an unknown number of shooters began firing at police who were working security at a peaceful protest in downtown Dallas, wounding 12 officers, five fatally.

At the request of the Dallas Fire Department The Salvation Army Box 4 Canteen, operated by retired firefighters, was deployed and arrived on the scene at 10 pm. This unit was moved several times throughout the incident to best serve responders. In addition to providing hydration services and snacks, the custom design of this unit also offers bathroom facilities to first responders. The Box 4 team continued to serve until 7 am when they were relieved by The Salvation Army Tarrant County/Lancaster disaster response team.

After collecting 150 meals from a local partner the Tarrant County mobile kitchen arrived at Dallas City Hall at 3 am and was moved into place at 8 am.

“The Salvation Army has been on the scene of the shooting all night and this morning providing meals and support,” said Major Jonathan Rich, The Salvation Army Dallas Fort Worth Area Commander. “We are in prayer for the families affected by this tragedy and will join in the interfaith vigil at noon, praying and providing cold water to all the participants.”

A third Salvation Army unit, the Dallas County Canteen operated by the Dallas Temple Irving team, has been deployed this morning to provide additional support. They will remain throughout the prayer vigil taking place at Thanksgiving Square in downtown Dallas, along with a team of Salvation Army officers, before returning to the Dallas Fire Department staging area.

Our thoughts and prayers are with the families of the fallen and injured police officers, and with the city of Dallas.