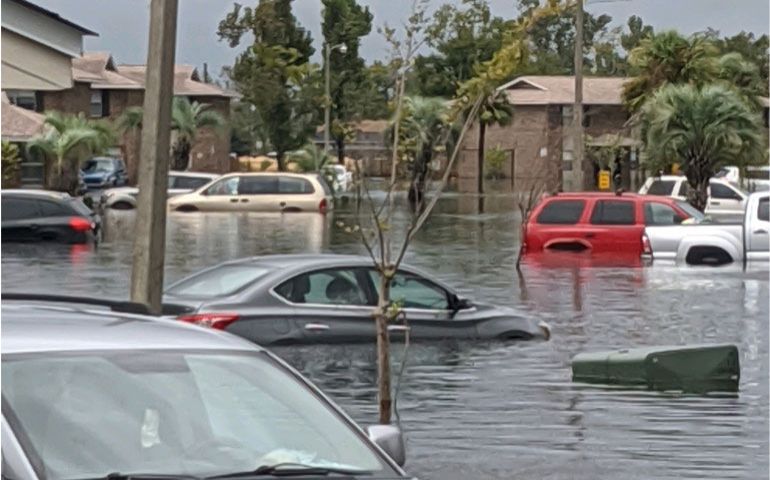 LUTZ, FL - Hurricane Sally has made her presence known as she made landfall just west of Pensacola early Wednesday morning bringing torrential rain and wind to most of the Panhandle of Florida. Salvation Army personnel remain hunkered down as rainfall levels continue to rise to record levels.

In Pensacola, corps officer Captain Herb Frazier III has indicated that there is wide spread power outages across the area including at the corps building. Rain continues to fall at a steady rate keeping everyone inside. So far more than 24” of rain has fallen and extensive flooding is occurring. He hopes to be able to make a more extensive survey of the area once the rain stops later today, especially at the corps which will be the central location of The Salvation Army’s response.

Lt. James Milner, corps officer in Ft. Walton Beach, forty five miles east  of Pensacola is reporting similar issues with record rain levels being reported, power outages and trees being down. The corps building has received some significant rain damage through the roof and into the  building.

Over in Panama City, Major Ed Binnex , where the community is still recovering from the effects of Hurricane Michael two years ago says this will just compound what had been done to recover from Michael. Major Binnex shared the above photo showing flooding in an apartment complex that was just reopened from necessary repairs after Hurricane Michael.

A fleet of mobile feeding units (canteens) with manned disaster relief teams are staging today at The Salvation Army’s Camp Keystone located near Starke, Florida in order to begin making their way to Pensacola first thing Thursday morning to aid in the relief operation.

An Incident Command Center will be established at the corps building in Pensacola headed up by Steve Vick, a long time Salvation Army employee and former resident of Pace, Florida for over 20  years, which is just east of Pensacola.

For the latest information on The Salvation Army’s response visit:

To help The Salvation Army serve those being impacted by Hurricane Sally visit: