The Hands and Feet of Jesus in Orange, Texas 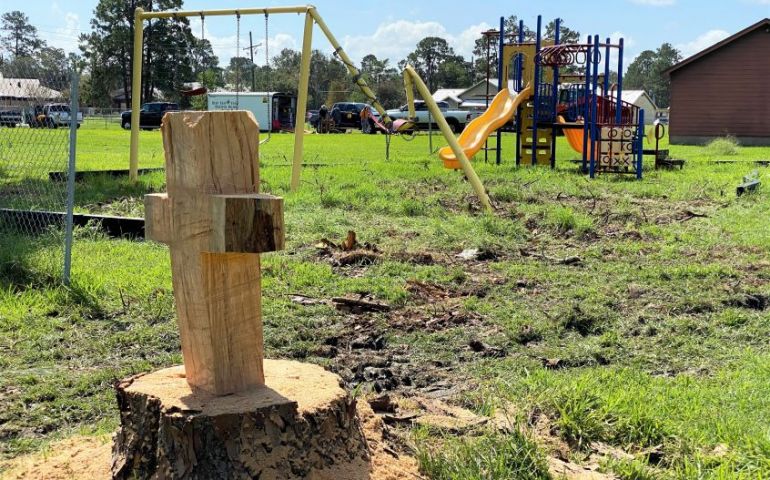 Orange, Texas (September 5, 2020) –The Salvation Army Officers, staff and volunteers in Orange, Texas, have spent the last week tirelessly providing meals and prayerful support to their community that sustained significant damage and power loss after Hurricane Laura. Thousands of residents have come to The Salvation Army and received hot meals and water from the drive thru distribution each day. The building has been without power since the storm and team members have continued to help others, despite their own challenges. On Friday morning, the Texas Baptist Men arrived at The Salvation Army unannounced, with chainsaws and heavy equipment in tow, ready to serve those who have been on the frontline of service since the storm.

Captain Jan Zuniga, Commanding Officer at The Salvation Army in Orange, appeared on a FOX 4 TV news interview on Thursday evening, stood outside by the church playground. During the interview she explained what The Salvation Army has been doing to help people after Hurricane Laura, how many meals have been served, and the plans for continued assistance in the coming days. All the while, viewers could see several large trees and debris from the storm strewn around the playground in the background.

Rocky Mize, an Orange resident and volunteer with the Texas Baptist Men, was sat at home watching the news as Captain Zuniga spoke of the work of The Salvation Army. Mize has been volunteering since the storm with the Texas Baptist Men working to remove fallen trees and clean up debris from homes and streets in the community. “Watching that interview and knowing what The Salvation Army does to help people in need, I knew that we had to do something,” said Mize. “I got in touch with my crew and we agreed to start our day on Friday at The Salvation Army and get their property and playground cleaned up. They are the hands and feet of Jesus to so many, and we were blessed to be that for them.”

“The Texas Baptist Men showed up with their chainsaws and got right to work,” said Zuniga. “In no time at all the fallen trees were gone and the whole place was cleaned up. In a beautiful gesture, Rocky carved a cross into the stump of a tree that had come down in the storm. This cross will remain as a constant reminder of God’s love and providential care for us. We want to say a huge thank you to the Texas Baptist Men for their hard work, not only at The Salvation Army, but also as they help residents throughout the area.”

Since Friday, The Salvation Army has served 91,891 meals, 60,580 drinks, 32,195 snacks in affected communities. Trained staff and Emotional and Spiritual Care volunteers have prayed with 1,092 storm survivors.