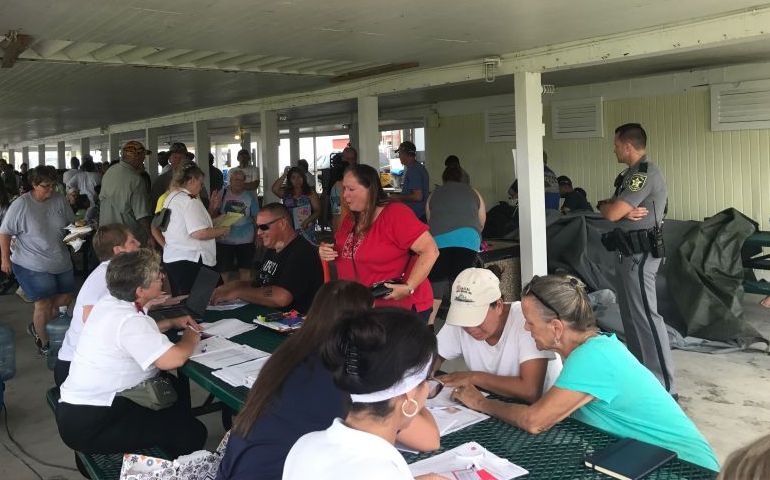 Naples, Florida – When Major Sue Dewan (known as Major Sue), a Salvation Army Corps officer serving in Oklahoma, arrived in Naples to offer Emotional & Spiritual Care for the local community, she never imagined she would be the one needing care as well.

While on her daily route from Naples to Everglades City, like so many disaster workers, the focus is always on those local residents directly affected. With thousands upon thousands that have been left empty in the wake of Hurricane Irma – physically, economically, emotionally and spiritually – it’s easy to understand why the attention is rightfully so on these now-fragile communities.

When she arrived at the assistance location in Everglades City Community Park, the immediate need was very clear. Individuals and families were waiting on average around two hours in order to receive monetary gift cards as well as baby/hygiene supplies.

Everglades City is renowned for its iconic national park. Having the largest subtropical wilderness in the United States and serving as an important habitat for numerous rare and endangered species; it’s breathtaking. What is not seen nor rare is the great need in this community especially now after the hurricane.

Major Sue was tirelessly working the in-take and registration process when a woman stepped up to the table that had been waiting in the long line. As they were talking, the woman asked Major Sue is she had eaten yet herself. The Major kindly responded that she did not have any time, but that it was ok because there were so many people were waiting.

Unfortunately this did not satisfy the woman and told Major Sue that she was going to sit in the chair next to her until she finished her meal. Stating that she was so thankful for her and The Salvation Army really helping the community, however, even relief workers need relief.

Both women sat together and chatted while sharing personal stories – creating a wonderful fellowship – all while Major Sue quickly ate her meal.

Beauty and wonderment are not always what we simply see in parks and skylines. It is often times what is beneath them, as in Everglades City. It is the fellowship and compassion of communities that makes for a true breathtaking experience.