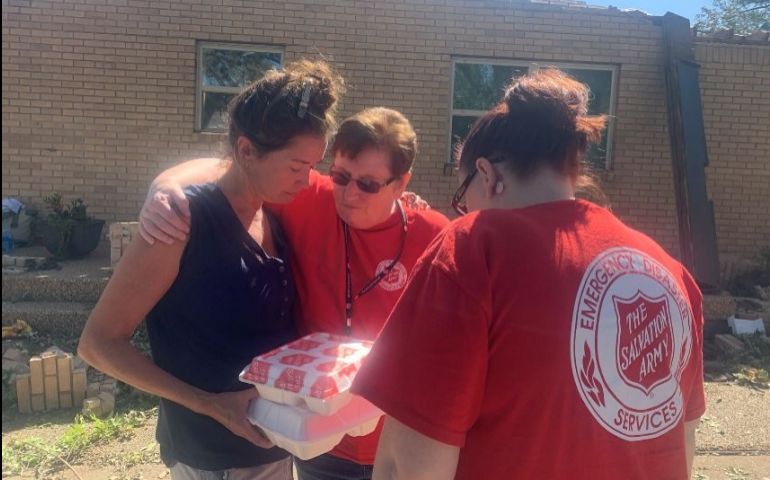 Once prepared, the food was packaged and transferred to two smaller food distribution trucks that were driven by workers into affected neighborhoods. Two hundred meals were also delivered to Forest Green Manor, an assisted living center that is still without electricity.

Mika Manester lives near The Home Depot on Forest lane. Volunteers with The Salvation Army brought her food for her family and they prayed. “The house is a total loss so right now I just want my children to be okay and not scared because my 7-year-old is freaking out ... we were all in the closet when our roof came off, it was awful,” she said.

Manester said she’s looking for a hotel to stay in and it will take around 8 months to find a new home. She said in all of this mess, she’s thankful for the support. “I have so many good friends…Salvation Army is here and just family and outpouring of people who just want to help and that means more to me than anything,” she said.

Current distribution opportunities remain limited because police have restricted access to the hardest hit areas, not even allowing meals to be delivered at this stage. As the strict access is lifted in upcoming days, new opportunities to serve will emerge.

Financial donations can be made at helpsalvationarmy.org or by calling 1-800-SAL-ARMY to support response efforts. For the latest Salvation Army disaster information please go to www.disaster.salvationarmy.org and watch for regular updates on our social media pages at www.facebook.com/salvationarmytexas/ and www.twitter.com/salarmytx