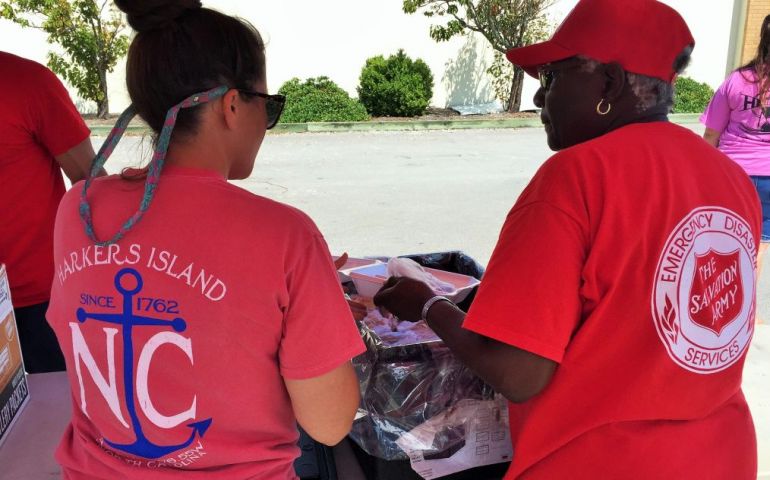 HARKERS ISLAND, NC (September 21, 2018) – Mariah Gillikin grew up on Harkers Island, a small island community in Carteret County that was rocked by Hurricane Florence. Due to the geography – jutting out into the Atlantic Ocean toward Cape Lookout – Harkers Island was one of the first areas to feel Florence’s impact, and it’ll likely be one of the last to feel the recovery. High winds, storm surge and rain – the 1,200 who call this place home felt it all.

“Fortunately, I had minimal damage at my house,” Gillikin said. “Considering what everyone else is going through, it was nothing.”

Gillikin now teaches at Harkers Island Elementary School, the school she attended as a child. But, she’s not going back to school any time soon … to teach, that is. She has been there all week, with a dozen friends, family and coworkers, to help The Salvation Army provide meals to her neighbors.

“There’s nothing better I can do with my time than help others,” she said.

While power crews are working their way down Highway 70 East, Harkers Island and many other nearby communities are still without electricity. School is canceled for next week, as most residents are still trying to assess the damage and start the recovery process. In the meantime, access to a good meal has been a primary concern. The Salvation Army has been there all week, setting up in the parking lot of Harkers Island Elementary School to serve lunch and dinner. To-date, The Salvation Army has provided more than 4,500 meals to people in need. They are able to drive up and get a plate, and Gillikin has organized an “army” of volunteers to help.

Keith Wall, a Harkers Island resident, stopped by to pick up lunch while out helping his neighbors cut fallen trees.

“Having a meal is great,” he says. “You can’t underestimate the value of things like water, ice and a good meal. It means so much that people have come from all over to help us.”

He’s right, the area has seen a rush of help from the outside. But, on Harkers Island this week, it's also help from the inside from neighbors like Gillikin. And, serving alongside her is Jeannie Garcia, a Morehead City resident with a story of her own.

During the hurricane, they lost power and part of their kitchen ceiling caved in. But, they managed to make it through.

She had peace in the storm, which is a product of her unwavering faith. Weighing on her mind was Psalm 118:24: “This is the day that the Lord has made; let us rejoice and be glad in it.” How do you rejoice when going through a hurricane? According to Garcia, you keep your eyes on Jesus. It’s not about rejoicing for the storm, it’s about being glad in it. And, her way of making the most of the day the Lord has made, is by giving of herself, just like Jesus did.

So, today, she and Mariah Gillikin are serving others alongside The Salvation Army. It’s not because they have to; it’s because they know their neighbors are in need.

“I’m just trying to be a servant,” Garcia said. “A ‘thank you’ isn’t necessary. If it blesses you, pass it on.”