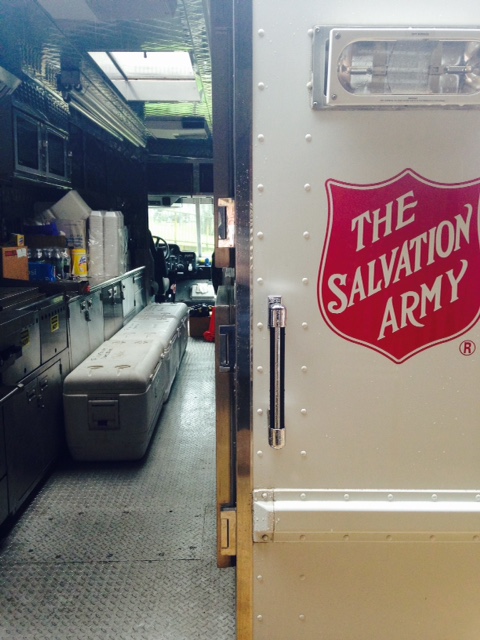 Shreveport, LA (March 10, 2016)  –The Salvation Army of Northwest Louisiana in cooperation with Caddo and Bossier Parish Emergency Preparedness Agencies is assisting with flood relief efforts in Shreveport, Haughton and Bossier City, Louisiana.  The flooding, which began with storms on Tuesday, has displaced over 3,500 families. Rain is forecast to continue in the area through Saturday.  Shelters have been opened in both Shreveport and Bossier City.   The Salvation Army is tasked with feeding the flood evacuees in the shelters as well as the emergency operations centers in both parishes.

“We are responding to needs as they arise, while preparing to assist with cleanup and recovery efforts in the weeks ahead,” says Major Ed Binnix, commander of the Salvation Army of Northwest Louisiana.  “Our canteen will be out in the neighborhoods during recovery with assistance which will include food, hydration and Salvation Army cleanup kits.”

The Salvation Army and its volunteers are often the first civilian agency on the scene and the last to depart— honoring a century-old commitment to serve those in need, at the time of need, and at the place of need. The Salvation Army disaster response teams are coordinated and directed by commissioned officers and trained personnel and supported by volunteers.

The Salvation Army asks people who want to help those affected by these storms to please give monetarily through this link:

DONATE BY MAIL
For Disaster Relief in LOUISIANA

or  text STORM to 51555 to receive a donation link for easy mobile giving.

About The Salvation Army
The Salvation Army, an evangelical part of the universal Christian church established in London in 1865, has been supporting those in need in His name without discrimination for more than 130 years in the United States. Nearly 30 million Americans receive assistance from The Salvation Army each year through the broadest array of social services that range from providing food for the hungry, relief for disaster victims, assistance for the disabled, outreach to the elderly and ill, clothing and shelter to the homeless and opportunities for underprivileged children. 82 cents of every dollar The Salvation Army spends is used to support those services in 5,000 communities nationwide. For more information, go to www.salvationarmyalm.org/shreveport.