Crossroads Residents Learn the Value of ''Others'' 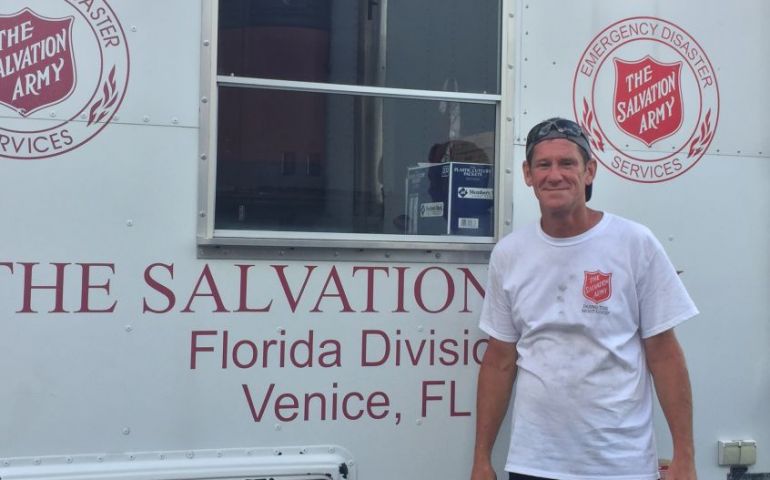 Fifteen men in The Salvation Army Fort Myers’ Crossroads program, staff and their families had a short devotional in the morning and spent the rest of the day waiting out the storm.

Crossroads is a  corps salvage rehabilitation center (CSRC), which helps men recover from their addictions, similar to an ARC.

“All the windows were boarded, but we could still see through the doors,” said Crossroads resident George Sprague, 51. “It was so strange to see all the trees blowing and going down.”

The very next day Sprague and the rest of the Crossroads’ residents were out clearing the property, making food off The Salvation Army mobile kitchen and driving to a family store to help transform the store into a staging area for Salvation Army Irma operations.

No one asked the residents to help

They just picked up tools and started working.

Residents have been on canteens, distributing meals even helping to cook.

“I don’t have any more family,” Sprague said. “The Salvation Army is my family.”

In November 2016 Sprague sat in his 2002 Ford Expedition watching the sunrise in North Fort Myers, by his side was a bible, his Alcoholic Anonymous book and a four-pack of Natural Ice beer.

“I opened the beer,” Sprague said. “That’s when I hit bottom."

He graduated from the program in June and decided to stay a little longer until he can find stable work.

“There’s no place I’d rather be than helping,” Sprague said. “I feel that I’ve finally found my calling.”